The term natural science comprises all those empirical sciences concerned with the methodical exploration of nature and the identification of the laws of nature. Following the old classification of animate and inanimate nature, natural sciences are still classified as predominantly mathematically-based exact sciences and the biological sciences. The first group comprises physics, chemistry, astronomy and geology, the latter refers to biology and its subcategories anthropology, physiology, genetics and ecology. Applied Sciences are those sciences that were probed in experiments and described by scientific theories, so that they became useful to man. Among them we find engineering and medicine.

The invention of book printing in the middle of the 15th century made observations and results of scientific research easily available to other scholars and the so-called black art  itself a child of the still young natural scientific thinking  largely contributed to the rapid development of science over the following centuries. Just as it was the case in other fields, some individual works were of a paramount importance. Nikolaus Kopernikus treatise De Revolutionibus orbium coelestium (1543) is a milestone for the development of humanities and turned the traditional concept of the world inside out. Andreas Vesalius work about the structure of the human body  also published in 1543  laid the basis for modern anatomy. Galileis description of the newly invented telescope and its usage in astronomy (Sidericus Nuncius, Venice 1610) marked the hour of birth of a modern astronomy based on observations. Isaac Newtons works on dynamics, gravitation and optics eventually led to the 17th centurys scientific revolution and his opus Philosophiae naturalis principia mathematica, released in London in 1687, is generally acknowledged as the most important work of physics of all. The same accounts for Darwins Origin of Species (1859), its significance does not only affect biology, owed to the ever increasing number of empirical validations from scores of scientists up until today it largely recognizes as the most fundamental accomplishment of human cognition. The list could be carried forth endlessly, all the way to the scientific revolutions of the 20th century through works by Einstein, Planck and Heisenberg. The most acclaimed collections of scientific books are those of Harrison D. Horblit (cf. sales catalog London 1974) or the one of Robert B. Honeyman (cat. London 1978).

First editions of named milestones are very rare and highly sought-after. They are some of the most popular collector's items in international book auctions and count among the gems of every collection. Accordingly, these books have realized remarkably high prices in our auctions.
More Information
+
Sell
You would like to sell a similar object?
+
Offers
I would like to receive information on future offers for Milestones of Natural Sciences
+
More Information for buyers
+
Sold lots for Milestones of Natural Sciences Top 100 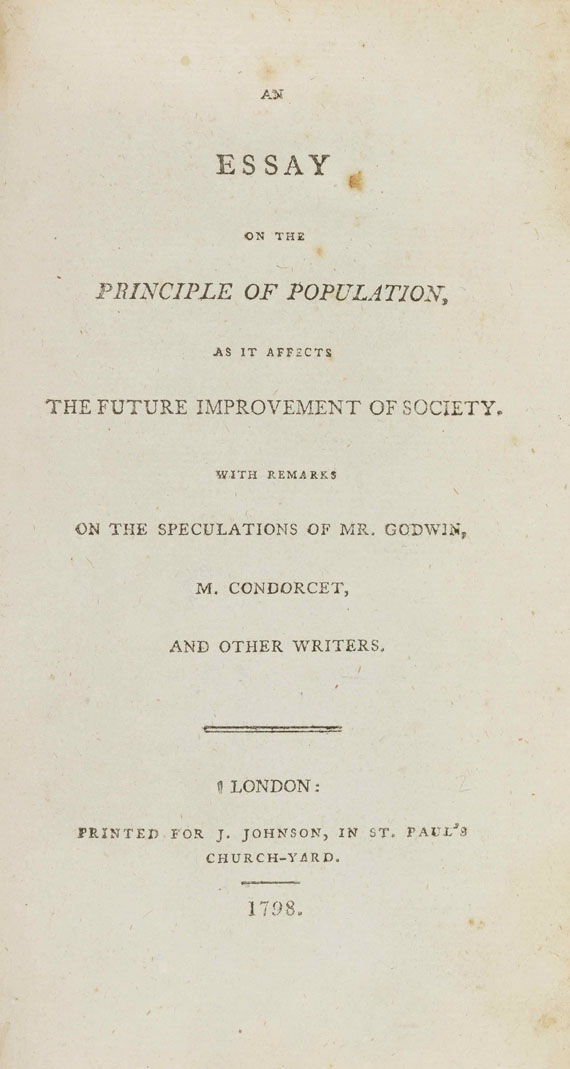 An Essay on the Principle of Population, 1798