The miniature book has variously been called the smallest possible book, dwarf book, mini-book or even micro-book. These are books in the smallest formats imaginable. The size of their pages including the binding is not more than 76.2x76.2 mm (3 x 3 inches). In the German-speaking countries, all books whose blocks do not exceed 100 x 100 mm are also classified as miniatures. Miniature books have been produced in nearly all familiar disciplines and especially in the fields of devotional literature, children's books, almanacs, erotica and traveller's bibles. The earliest known miniature book is the "Officium Beatae Virginis Mariae", measuring 76 x 51 mm and printed by Matthias Moravus in Naples in 1486. For more than two centuries "Bloem-Hofje", measuring 12 x 8 mm, a book of poems printed by C. van Lange in Amsterdam ca 1674, was believed to be the smallest printed book. The 17th century was the heyday of the miniature book. In the 20th century miniaturisation had proceeded so far that "The Lord's Prayer' (Japan, Toppan 1981) measured only 1.4 mm². Nowadays miniature books are still popular collector's items. The Guinness Book of Records notes collectors of miniature books who have amassed more than 5000 titles. The passion for the smallest books of all must surely be rooted not only in appreciation of the technical and artistic achievement they represent but also in a fascination with their simply being so small and, finally, the opportunity they provide owners of carrying them about everywhere concealed on their person, safe from prying eyes. (For more information on the subject: - Bondy, L.W., Miniature books. London, Sheppard Press 1981; - Mikrobiblion. Das Buch von den kleinen Büchern. Berlin, Horodisch & Marx 1929) 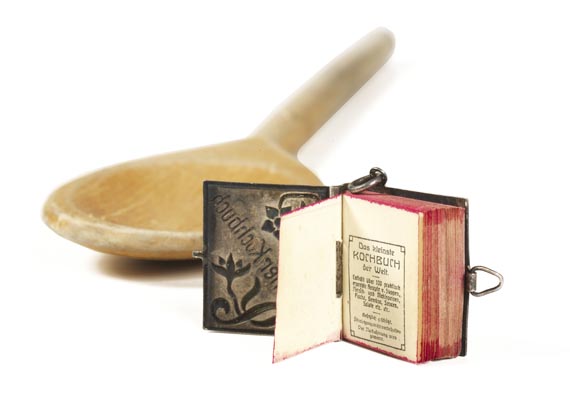