Around 1450 a new age began with Johannes Gutenbergs groundbreaking invention of book printing. An invention not only seminal for the written form of knowledge, but of outstanding relevance for the progress of science in general. Printing with movable types is one of the few inventions that propelled mankind to a new era within just a few decades.

The oldest book printing products, from Gutenbergs famous 42-line Bible from 1455 over Hartmann Schedels acclaimed Nuremberg Chronicle from 1493 up to the remarkable prints from 1500, have been described with the term Incunabula (in cunabula = Latin for swaddling clothes).

An incunabula documents the first developmental stage of the book in finest technical and graphic manner. As far as their make is concerned they largely follow the highly developed production of 15th century manuscripts. Generally, works from the early period still were of experimental character, both in terms of print technique and typography. Characteristic features that are common today, such as title sheet, page numbering, imprint and typography, had to be invented and developed. What is most remarkable about these first attempts is that the works produced were masterpieces of black art: Most incunabulas are masterpieces in terms of paper, typography, clean and even print image, composition and layout, combination of writing and images, legibility, feel, binding and cover make, which poses an art form of its own. The best works among them served as models over the centuries, all the way to the bibliophile press prints from the 20th century.

While the very first works still were of theological or religious-uplifting nature, their scope soon covered most fields of science and life in general, primarily ancient literature, which saw a renaissance through its rediscovery by book printing. Other popular works were herbals and medical books, renowned legal works, chronicles and encyclopedias, literature from Wolfram von Eschenbach to Boccaccio, travelogues and geographic works, satires and calendars as well as all sorts of folklorist and vernacular works. The amount of preserved incunables shows the quick spread of knowledge throughout Europe: World-wide around 27,500 works with a total of 550,000 copies have survived.

Incunables are the most sought-after collector's items on international book auctions and count among the gems of every collection. This is even more true for first editions (editio princeps) by renowned classic authors like Aristotle, Cicero or Ptolemy. Well-preserved copies of famous works illuminated with woodcuts, such as the Nuremberg Chronicle, the Koberger Bible and the Gart der Gesundheit are also very popular with collectors and realize high prices in our auctions.
More Information
+
Sell
You would like to sell a similar object?
+
Offers
I would like to receive information on future offers for The 1.Cent. in Book History
+
More Information for buyers
+
Sold lots for The 1.Cent. in Book History Top 100 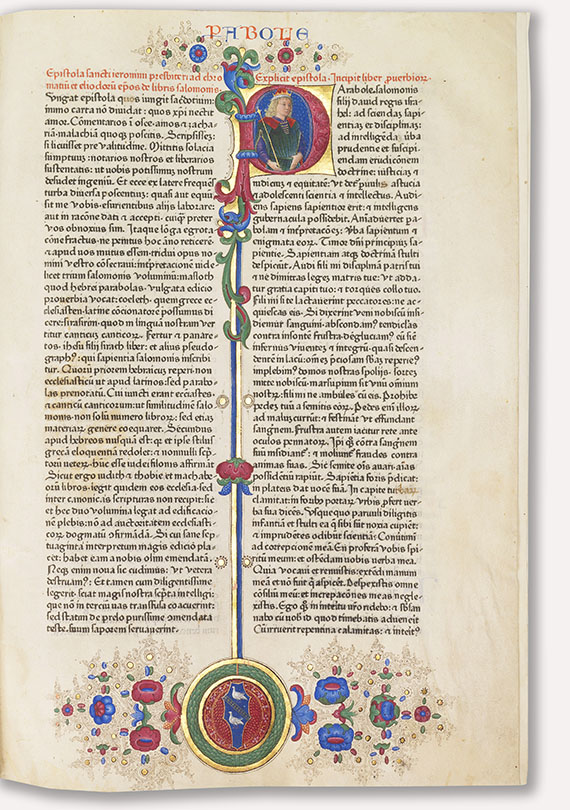