CoBrA was one of the most important artists groups within the Informel movement. The groups founding members were Asger Jorn (1914-73) from Denmark, Constant (Constant Anton Nieuwenhuys) (1920-2005), Corneille (Cornelis Guillaume van Beverloo) (born 1922) and Karel Appel (1921-2006) from Holland, and the Belgian artists Christian Dotremont (1922-79) and Joseph Noiret (born 1927). These artists were representatives of various artistic groups in their respective countries, and met during a Surrealist congress in Paris. Unhappy with the results of the congress, they decided to start their own group, founding CoBrA on 8th November 1948. The name was a combination of the first letters of the capital cities of Copenhagen, Brussels and Amsterdam, and reflected the groups international character. Other artists soon joined the group, including Eugène Brands, Lucebert, Anton Rooskens, Mogens Balle, Egill Jacobsen, Pol Bury, Pierre Alechinsky, Shinkichi Tajiri, Karl Otto Götz and Siegfried Reich.
Although Cobra failed to develop a homogeneous style, there were unifying positions within the group, which were articulated in numerous manifestoes. The CoBrA artists primary aim was to create a new, spontaneous, and expressive form of abstract art, which would stand in contrast with strict artistic styles such as Constructivism and Geometric Abstraction. Naive Art Brut, as defined by Jean Dubuffet, primitive art and Northern folk art, all influenced the group.
The formal characteristics of the CoBrA groups oeuvre included the vital and frequently impulsive layered application of colour, an often powerfully bright palate, and a preference for painting over drawing. These were all typical features of Tachist and Informel art. Spontaneous artistic gestures were expressed on canvas using rapid brushstrokes, and the painterly process played an important role in the artists work. CoBrAs main aim was to express feelings and perceptions. The painting process produced abstract-figurative images, in which the subjects - frequently archetypal or mythical figurations, such as bodies, masks, and phantoms  were pushed to the edge of visibility. The CoBrA groups first public exhibitions included a show at the Stedelijk Museum in 1949 and Karel Appels mural in the Amsterdam Town Hall Questioning Children which provoked incomprehension from the public. The CoBrA group was dissolved in 1951, just three years after its founding, due to increasing internal conflicts.
More Information
+
Sell
You would like to sell a similar object?
+
Offers
I would like to receive information on future offers for CoBrA
+
More Information for buyers
+
Sold lots for CoBrA 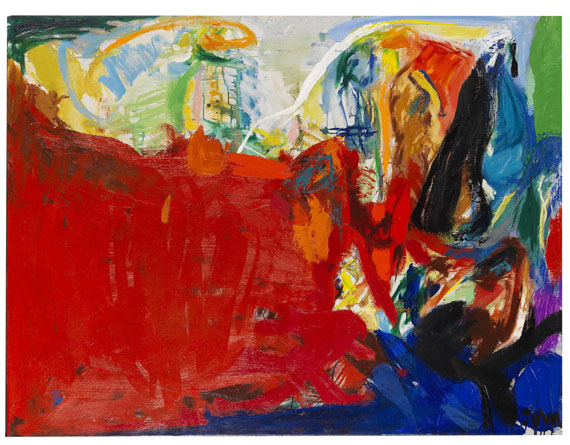