In the visual arts, both the decorative and applied and fine arts, cartouche is the term generally used for an ornamental framing element of decoration, featuring bands with rolled-up ends or scroll-like shapes. The term is, however, usually used in connection with the combination that emerged in the Late Renaissance and came into widespread use in the Baroque and Rococo periods of a decorative framework and a field for inscriptions, etc, on which armorial bearings, marks, symbols, etc, appear. Particularly popular in cartography, the cartouche was used as a decorative framework and for fitting geographically relevant inscriptions into the overall scheme of a map. Map cartouches may contain the title of the map, a dedication, the printer's address, date of publication, the scale of the map and legends. The function of the cartouche in cartography is, apart from conveying information, to fill up empty space or distract the viewer's attention from missing but needed geographical data. Cartouche design varies according to period style and cartographer. Cartouches on 15th-century maps are modelled after Italian precedent, consisting of simple strapwork, whereas by the 16th century architectural and figurative elements are added. However, the cartographic cartouche was in its heyday in the Baroque period. Baroque cartouches - which often took up a considerable part of the map itself - were the most richly diverse, incorporating human and animal figures, allegories, floral and representational decoration, architectural elements as well as objects characteristic of particular regions and even entire landscapes or scenes with reference to the region represented by the map. The most decorative cartouches, most of which are also embellished with coloring, come from the Netherlands. In the 18th century, cartouches were adapted to the lighter Rococo style and decorated with chinoiserie elements, romantic-looking ruins, delicate garlands of flowers and the like. When, towards the close of the 18th century, scientific accuracy was increasingly given priority over ornamental effects in cartography, a more austere style developed, with map cartouches often consisting merely of simple oval or rectangular fields with inscriptions. 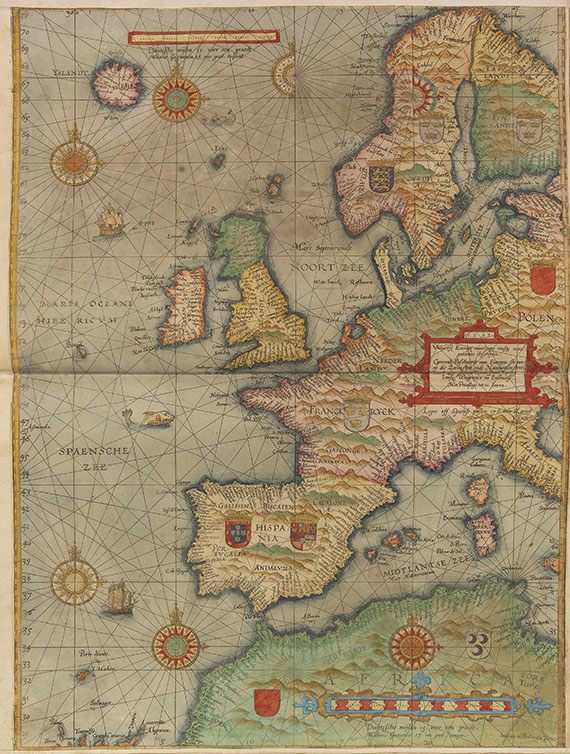