The word architecture originally comes from Old Greek and was introduced through the work De architectura libri decem by the Roman builder Marcus Vitruvius Pollio (1st century BC). While still in use in early medieval sources, the term was largely in oblivion in the high and late Middle Ages and was rediscovered only during Renaissance in context of new Vitruv studies and the influence of Italian architecture theorists. Literary works from the 15th to the 18the century occupied with theory and practice of building are generally called architecture books. In general, all these works go back to Vitruvs first edition that was printed in Rome around 1486, which is one of the most valuable books in auctions. Owed to its fundamental significance for Renaissance and Baroque architecture, Vitruvs work is regularly sold at auctions and can be found in many renowned libraries.

Another groundbreaking work of Renaissance architecture theory is Leon Battista Albertis (1404-1472) De re aedificatoria libri decem (Florence 1485). Up until the early 16th century the Vitruv editions and Albertis work were published without illustrations. The first complete illustrated Vitruv edition was published in 1511 (Tridino, Venice). Translated into the big national languages, these illustrated editions soon spread all over Europe. The first Italian edition was released in 1521, the first German in 1548.

Later works like Sebastiano Serlios Regole generali di architettura (Venic 1537) or Andrea Palladios I quattro libri dellarchitettura (Venice 1570) were richly endowed with woodcuts or even copper plates, as it was the case with Giacomo Barozzi da Vignolas La regola delli cinque ordini darchitettura (1562) and Vincenzo Scamozzis Lidea della architettura universale (1615). These works are part of many book collections. Ideas and buildings of these leading late Renaissance architecture theorists were crucial for architecture up into the 18th century, however, their works continue the comprehensive ideas of, for instance, Alberti, only in the sense of a morphology, e. g. the classical order. This was how the so-called Column Books came into existence. They were inscribed with just short texts in the works of Serlio and Vignola. Towards the end of the 16th and in the course of the 17trh century, they featured architectural decorations and were more like pattern- or model books. Important German architecture books are Architectur by the first Vitruv translator Walter Hermann Ryff (Nuremberg 1548) and the Architectura (Stuttgart 1593) with copper plates by Wendel Dietterlin. During the days of baroque French architects like Ph. de LOrme, A. du Cerceau or C. Perrault had decisive influence on European architecture. J. F. Blondels Cours darchitecture civile (Paris 1752) was a popular study book in France for more than hundred years.

Besides mainly theoretic works, another category of architecture books are works with illustrations of ancient monuments, for example Hypnerotomachia Poliphili by F. Colonna (1499) with the famous woodcuts, the compilation of coppers of ancient Romany buildings by A. dellAbacco and the etchings of G. B. Piranesi from the 18th century.

Russian 20th century architecture occupies an own section. Under the influence of the Russian avant-gard, a large number of buildings were executed between 1915 and 1935 that had decisive impact on modern architecture. El Lissitzkys work from 1930 is considered a classic of architecture in the days of the Russian revolution..

Horticulture occupies another field of architecture, as gardens and parks had always played an important role in European architecture since antiquity. Over the course of time garden art, historic precursor of landscape architecture, became an independent and highly acknowledged art form, especially during the baroque age. The 16th century was characterized by Renaissance gardens and Johann Peschels (1535-1599) Die Gartenordnung was the first German instruction on garden design. His gardens show the beds in typical Renaissance order. Joseph Furttenbach (1591-1667) also illustrated similar ideas in, for example, his Architectura universalis. As of the mid 18th century English landscape gardens dominated the architectural trend and stood on strong contrast to the previously prevailing French idea of baroque gardens with their large geometrically arranged flower beds. Designs of English gardens, on contrast, put focus on natural aspects. The German Christian Cay Lorenz Hirschfeld (1742-1792) was known as an advocate of landscape gardening, his important theories were published in German and French between 1779 and 1785. Hirschfelds Gartenkunst can still be found in many acclaimed libraries and book collections and realize good results in auctions.

The State Bauhaus was founded as an art school by Walter Gropius (1883-1963) in Weimar in 1919. Bauhaus stands for a junction of art and craftsmanship. A key concept of the Bauhaus was to treat architecture as a complete artwork and to merge it with other forms of art. Architects, artists and designers coined the Bauhaus style, which exercises its influence up until today. The Belgian Henry van de Velde (1863-1957), Ludwig Mies van der Rohe (1886-1969) and Le Corbusier (1887-1965) are key figures of the movement. Bauhaus architects also created spectacular landscape gardens. Even 100 years after the formation of the Bauhaus, the influence on contemporary architecture is still strong, many valuable books on this topic can be found in the top libraries.
More Information
+
Sell
You would like to sell a similar object?
+
Offers
I would like to receive information on future offers for Architecture
+
More Information for buyers
+
Sold lots for Architecture Top 100 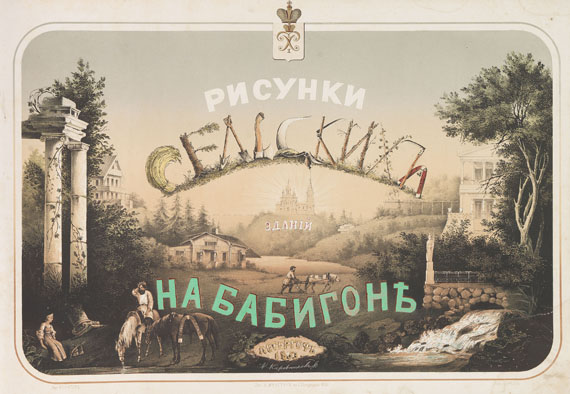