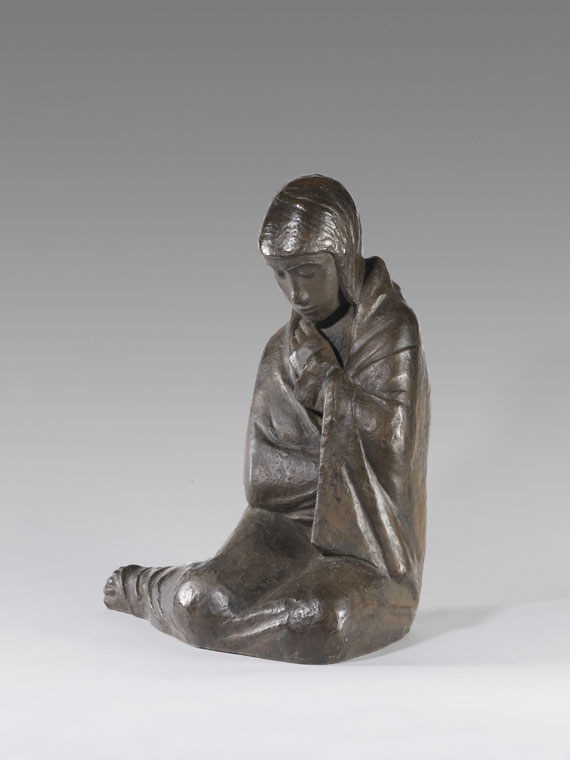 The bronze "Still allein" is offered on the international auction market for the first time (source: www.artnet.de).

Gerhard Marcks was born in Berlin on 18 February 1889. He moved into a joint studio with the sculptor Richard Scheibe after graduating from school in 1908. His artistic work was interrupted by military service in 1912 in Lübeck and the war. Bruno Paul offered the artist a teaching post at the Staatliche Kunstgewerbeschule in Berlin in 1918. Marcks accepted the offer, but joined Walter Gropius at the Staatliches Bauhaus in Weimar one year later. He was made responsible for the Bauhaus pottery in Dornburg/Saale in 1920. After five years Paul Thiersch appointed Marcks to teach the sculpture class at the Kunstgewerbeschule Burg Giebichenstein/Halle on the Saale. During this period Marcks went on several trips to Italy and Paris and in 1928 he travelled to Greece for the first time. In this year he was awarded the Villa-Romana-Prize.

According to a draft from 1931, Gerhard Marcks had originally planned to make a gable with figures, however, he never executed it. "Still allein" is one of those gable figures, which must be regarded as an individual work without its pendants. The contemplative element is the sculpture's main feature. With its slightly bowed head and the shadowed facial expression, it reveals a magic of silent detachment from reality. All in line with the title, her posture is of a reserved kind. The upwards pointing hands support the meaning. The head and the paralleling shanks of the angled legs close the figure's front. The being lost in thought, almost asking the observer to join in the silent contemplation, ist one of the most remarkable plastics that Gerhard Marcks ever made. In this work expression and form encounter in an ingenious manner, just the way that we can expect from one of Germany's most important sculptors of Modernism.

When Marcks was dismissed from his teaching post on Burg Giebichenstein in 1933 he moved to Niehagen in Mecklenburg. Four years later his works were confiscated. Like many other artists, he suffered under National Socialist cultural politics: he was banned from exhibiting and threatened with a ban on continuing his profession. Two of his works were shown in the exhibition "Degenerate Art". The studio house in Berlin-Nikolassee, which had been built five years earlier, was bombed during an air raid in 1943, destroying most of the artist's works. Other works which were stored in Halle were also destroyed in 1945. After the end of the war Marcks taught at the Landeskunstschule in Hamburg. He moved to Cologne-Müngersorf in 1950 where he had a studio and worked as an independent artist. He was awarded with prizes such as the Großer Kunstpreis des Landes Nordrhein-Westfalen in 1954, or the Kunstpreis der Stadt Berlin in 1955. In 1952 he was made a knight of the peace class of the order "Pour la Mérité". Numerous travels during the 1960s and 1970s took the artist to the USA and to Mexico, South Africa, Italy and Greece, where he bought a summer house on the island of Aegina in 1960. Marcks established another home in Hain in the Eiffel in 1973. He died eight years later from a stroke. [KD].