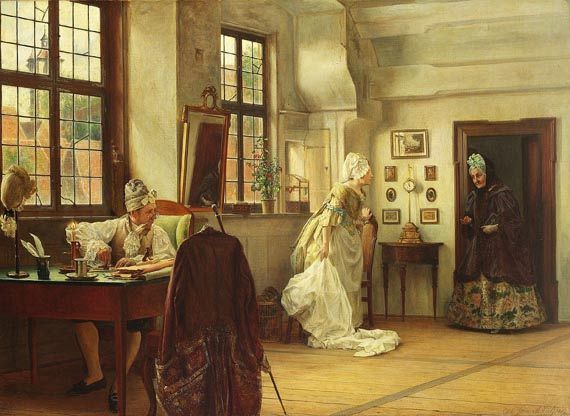 PROVENANCE: Acquired at the "Ständigen Kunst-Ausstellung der Münchner Künstler-Genossenschaft" in 1918, since then in possesion of a northern German family.

Oskar Freiwirth-Lützow was born on 12 May 1862 as a Geneva citizen in Moscow. Having returned to Geneva, he begins to study art in the early 1880s, continuing his studies in Düsseldorf before he went to Paris in 1882, where he studied for several years at the renowned Academy of Arts as a student of Adolphe Bouguereaus. Under his teacher's influence he shows a clear favor for genre depictions. Another short stint to the Munich Academy is followed by a second stay in Russian from 1889 to 1899. He becomes established as a genre painter in St. Petersburg and becomes a member of the exclusive St. Petersburg artist's society. One of his paintings is shown at the St. Petersburg spring exhibition in 1890 for the first time. His work is much-praised by the audience and acquired by the grand duke Alexander Michailowitsch. Tzar Nicholas II. also takes notice of the artists and bought two paintings from him. However, the artist decided to return to Germany where he first worked for several years in Munich.
As of 1905 Freiwirth-Lützow participated in various both national as well as international exhibitions with great commitment, which enabled him to present himself as a high-quality painter of bourgeois Realism. The painting "Die Gevatterin", which is exhibited in the Munich 'Glaspalast' in 1909, is regarded as one of his main works and honored with a second gold medal. Due to his enduring popularity his works were shown as reproductions in various both national and international magazines.
In 1914 the artist withdraws to his country seat in Füssen im Allgäu, where he died in 1925. [CM].

More Information
+
Sell
Get a free appraisal for a similar object!
+
Register for
Oskar Freiwirth-Lützow
+
Buying from A-Z
+
Contact a specialist
Share