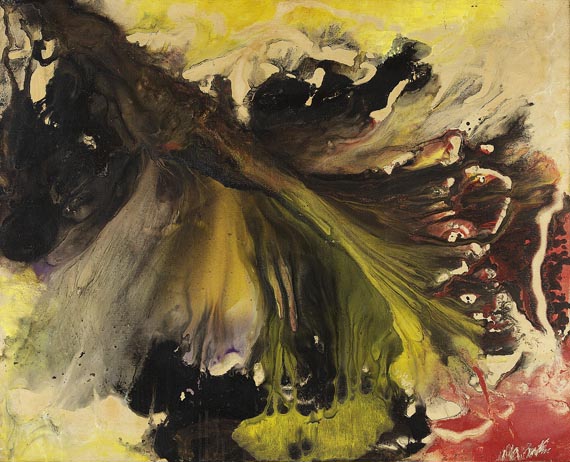 Egypt Wind. 1957.
Oil on canvas.
Signed lower right. Signed, dated and inscribed "New York" on the reverse. Once more signed, dated and titled on the stretcher. 81 : 100,5 cm (31,8 : 39,5 in). Paul Jenkins’ pictorial universe consists of streaks of colour that awaken associations. He produced his first picture with diluted paints in 1951; later they were executed as pour pictures. The layers of pigment covering the picture supports are whisper-thin. Jenkins’ handling is intuitive yet informed by philosophy. He is receptive to sources of inspiration provided by the manifold impressions he has of his immediate surroundings. His aesthetic experiments usually involve the prismatic colours of the rainbow. However, the American painter also works up the impressions he has received on his extensive travels. In such cases, it is the distinctive colour of a particular place that he finds most fascinating. [AS]