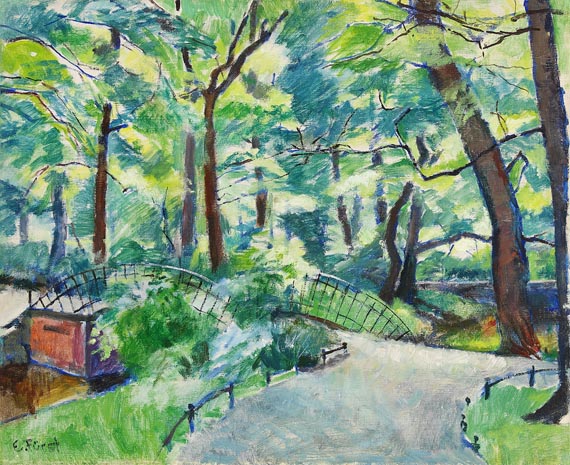 Brücke im Berliner Tiergarten. 1920.
Oil on canvas.
Signed lower left. 45,5 : 56 cm (17,9 : 22 in). Born in Berlin in 1874, Edmund Fürst studied at the Berlin Academy and showed work regularly at the Berlin Secession exhibitions and the Great Berlin Exhibition. After the first world war, Fürst worked for Ullstein Publishers as a retoucher and press draughtsman. In 1934, however, he was forced to leave Germany because he was Jewish. He settled in Palestine in an area that later became Israel and lived in Tel Aviv until he died in 1955. Fürst’s early works are strongly Impressionist in character whereas warm Mediterranean colourism replaced the cool palette of his early Berlin days. [NB]

More Information
+
Sell
Get a free appraisal for a similar object!
+
Register for
Edmund Fürst
+
Buying from A-Z
+
Contact a specialist
Share