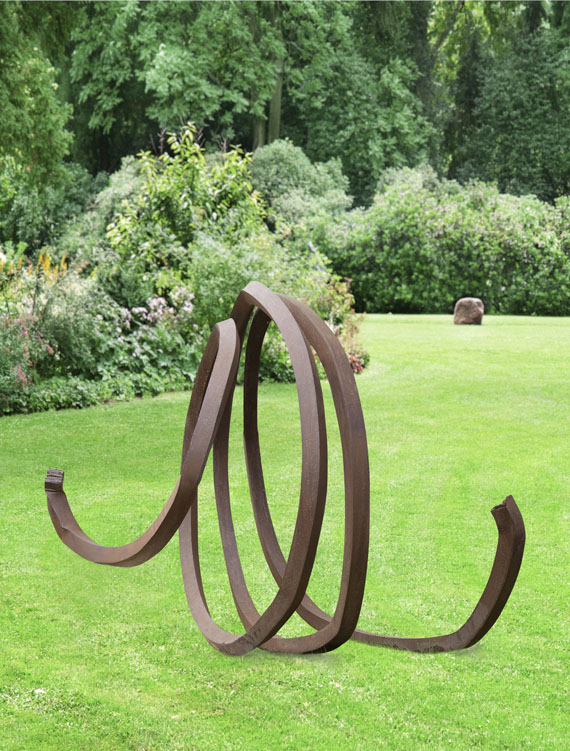 • Unique object.
• For the first time offered on the international auction market.
• Bernar Venet is one of the most important contemporary sculptors and is the internationally most exhibited French artist.
• In his steel sculptures the artist transfers the drawn line to a three-dimensional form.
• The year this work was made, twelve works from the series "Indeterminate Line" were shown on Champ de Mars below the Eiffel Tower in Paris.
• Other "Indeterminate Lines" are at, among others, the entry to 'La Defense' in Paris, the Detroit Institute of Arts and on the premises of the MIT, Cambridge (MA).
• In 1977 Venet showed works at documenta 6 in Kassel and in both 1978 and 2009 at the Venice Biennial.

Accompanied by a photo expertise signed by the artist and issued by the Bernard Venet Studio Archives, New York, from October 15, 2007.

"Each sculpture is the result of improvised, intuitive, empirical work. I am uncertain of the result during the entire process. Steel emposes its limits. I must yield to this and accept its nature."
Bernar Venet, quoted from: Frederik Meijer Gardens & Sculpture Park, www.meijergardens.org/explore/two-indeterminate-lines/.

For more than forty years, Bernar Venet's work has been shaped by his occupation with the line. In the 1960s, the artist initially worked in a highly conceptual manner, transforming scientific theories, mathematical equations and functions into graphic representations, which he showed at the Museum Haus Lange in Krefeld, the Kunsthalle Düsseldorf, the New York Cultural Center and at documenta 6 in Kassel. In the late 1970s, Venet devoted himself intensively to sculpting, especially to metal sculptures. In addition to his first "Arcs", monumental steel arches with a curvature precisely defined by Venet, cut circle segments, diagonals, straight lines and finally the indefinite lines wound into sweeping circles, the "Indeterminate Lines", to which the work offered here also belongs. Without a draft or preliminary drawing, but with heavy tools and great physical effort, the huge steel beams are bent into shape. However, the artist himself emphasizes: "It has nothing to do with physical exertion. I have the feeling that I have to move things mentally." (Quoted from: Camilla Péus, Mann der großen Geste, Welt online, July 27, 2014) The works are rather the result of a certain interplay of empirical values, conceptual considerations, intuition and coincidence. According to the title "Indeterminate Lines", the artist cannot and does not want to foresee the final form of the respective sculpture during the creative process: "I wish to introduce an art form of the unproportional, of the unconstructed, of the indeterminate. A discipline, in which the unpredictable, the unexpected is generated under different parameters." (Bernar Venet, quoted from: www.galerie-boisseree.com/en/artists/bernar-venet.html). Venet has to adapt to the properties of the often industrial material, adapt his method to the metal and use its properties to his advantage. In doing so, he designs what is actually a contradictory simultaneity of massive material and a casual playfulness of form. Venet succeeds in translating the form and idea of \u8203\u8203 a delicate, fleetingly drawn line into a powerful three-dimensional sculpture that is, in terms of lightness and immediacy, in no way inferior to spontaneous scribblings. Like the work offered here, the sculptures enter into an exciting relationship with the surrounding space through the open spaces amidst the fine, squiggly line shapes, incorporating nature, architecture or urban events into their impressive spatial presence and thus explaining Venet's outstanding position that has endured for decades as a pioneer of minimalist, conceptual sculpture.

The artist's sculptures are installed in numerous public places around the world, e. g. in Auckland, Bergen, Berlin, Bonn, Denver, Paris, Nice, Seoul, Shenzhen and Tokyo. They are also in important international collections, including the Center Pompidou in Paris, the Museum of Contemporary Art in Los Angeles (MOCA), the Musée d'art Moderne et contemporain in Geneva (Mamco) and The Hirshhorn Museum and Sculpture Garden in Washington , D. C. Bernar Venet is considered one of the most important contemporary sculptors. In 2003 alone there were 17 solo exhibitions of his work. As early as in the 1970s he showed works at documenta 6 in Kassel, the Venice Biennial, where he exhibited again in 2009, once again demonstrating his long standing influence on modern and contemporary sculpture. In 2011, Venet was the fourth contemporary artist with a solo exhibition at the Palace of Versailles. In 2018, two major French museums, the Musée d'art contemporain in Lyon (MAC) and the Musée d'art modern et d'art contemporain in Nice (MAMAC), devoted extensive retrospective show to him. Only three years ago, Venet's work "Arc Majeur" was installed above a motorway between Belgium and Luxembourg, and since then it has been considered the largest public sculpture in Europe. This year, Venet's expansive sculptures are included in what is the most comprehensive retrospective of the artist to date at Kunsthalle Berlin in the hangars of the former Tempelhof airport, and the Louvre-Lens shows his works in its 1000 square meter glass pavilion. [CH]
More Information
+
Sell
Get a free appraisal for a similar object!
+
Register for
Bernar Venet
+
Buying from A-Z
+
Contact a specialist
Share