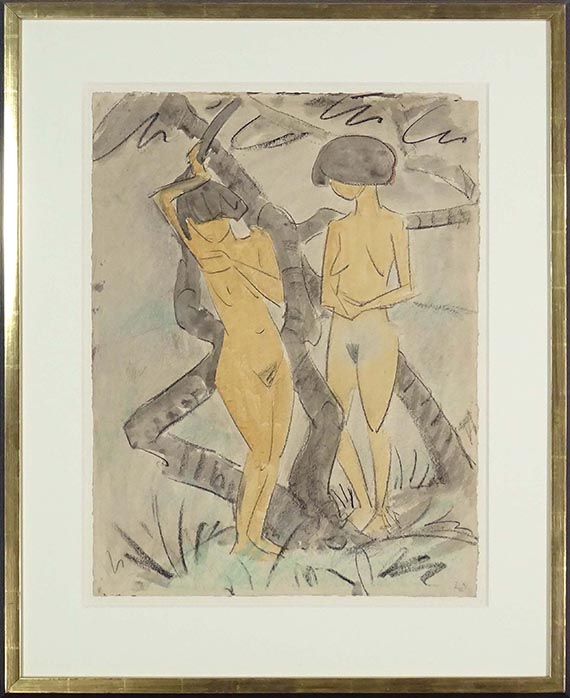 • This chalk drawing in soft watercolors has an eventful provenance.
• The artist sketches the well-balanced and well-proportioned bodies in simple, swift and poised lines.
• Impressive large-sized drawing.
• Otto Mueller's multi-figure nudes are his most sought-after works on the international auction market.

Bathers in ponds and lakes or girls sunbathing in nature, always youthful nudes, are the artist’s style-defining motifs: countless variations on a seemingly inexhaustible theme, which Otto Mueller describes in 1919 in the foreword to his first solo exhibition at Cassirer as the goal of his endeavors, "to express the feeling of landscape and people with the greatest possible simplicity".

Enclosed by nature
With the greatest possible simplicity and search for originality, Mueller made a watercolors of two girls standing next to and in front of a tree with several trunks on a sandy ground covered with reeds. The artist sketches their balanced and well-proportioned bodies with simple, quickly and confidently drawn lines, and uses soft colors to lift the girlish figures out of the surrounding nature. The heads are mostly bent slightly forward, their faces framed or covered by chin-length hair. The harmony between the girls and the details of the landscape is obvious, like "a fugue of the most beautiful leisure, which determines each individual composition as an elementary figure", according to art critic Willi Wolfradt in 1929, characterizing Otto Mueller's world of images. With poetic prose, Willi Wolfradt describes these girls in comparable compositions: "Young nakedness, slim and brittle in stature and demeanor, crouches casually in the grassy banks of ponds surrounded by forests, entered into the holy inactivity of nature" (quoted from: Das Kunstblatt, issue 6, Berlin 1922, pp. 142ff.).

Especially the often clearly desired, as well as deliberative distribution and interlacing of things in Mueller‘s art, the equally tuned, euphonious as well as subtly composed variations are reminiscent of the structure of Paul Cézanne's texture. However, Otto Mueller - whose intense and direct examination of Cézanne is assumed here - seems to have reduced the plastic body formation in nature even more, and also simplified the various body gestures of the sitting, squatting, standing figures towards one another. Berlin was the place where the art of the French Impressionists was particularly cultivated and where, in addition to the gallery owner Paul Cassirer, the painter and long-time chairman of the Berlin Secession Max Liebermann, the then director of the Berlin National Gallery Hugo von Tschudi, as well as the art critic and writer Julius Meier-Graefe advocated for the modern art of the western neighbors.

Encounter with the Brücke artists in 1910
The encounter with Ernst Ludwig Kirchner and Erich Heckel in Berlin in the spring of 1910 on the occasion of a joint exhibition at the gallery ‘Macht’ not only was the beginning of a close friendship between the two very different "Brücke" artists. This encounter also had an extraordinarily important, if not overtly visible, influence on Otto Mueller's style. Kirchner and Heckel's experiences during excursions with their models into nature, the way in which and at what distances from the artists the models moved in the lake landscape near Moritzburg, immediately aroused Mueller‘s interest, as he had previously, as early as in 1901, for the first time approached similar subjects during summer stays on Hiddensee or on Fehmarn around 1908. Even in the years in which the artists went vacationing together, for example to the island of Fehmarn or to the Kiel Fjord, it inevitably showed that they had something in common.


Eventful provenance history
This delicate watercolor chalk drawing has an eventful provenance history.
In 1924, Ludwig Justi, director of the Berlin National Gallery, exchanged the sheet with the artist for an earlier work. In the course of the "Degenerate Art" campaign, initiated by the Reich Ministry for Public Enlightenment and Propaganda in Berlin, the watercolor was confiscated on August 16, 1937 and given to the German Reich without compensation under the "Law on Confiscation of Products of Degenerate Art" of May 31, 1938. On February 13, 1939, Ernst Barlach's secretary, the sculptor and art dealer Bernhard A. Böhmer from Güstrow, one of the four art dealers officially authorized to exploit "degenerate art", purchased the work "Zwei Mädchenakte" for 1 US dollar in exchange for foreign currency . Böhmer, who was very close to the National Gallery in Berlin and a friend of the chief curator of the collection, Paul Ortwin Rave, not only bought this watercolored chalk drawing by Otto Mueller from the confiscated bundle of drawings with the National Gallery provenance, but also as many others as possible, as he hoped to return them to the National Gallery after the end the Nazi era. In early May 1945, shortly before the Russian army reached Güstrow, Böhmer committed suicide with his wife and left a minor son in the care of his sister-in-law Wilma Zelck. Wilma Zelck managed to transport a large part of the bundle of "Degenerate Art" from Güstrow to Rostock, West Berlin and West Germany and sold the art piece by piece to collectors and museums over the coming years. The part that remained in Güstrow was secured by Kurt Reutti, art historian and head of the Department of National Education of the East Berlin magistrate, in 1947, including a large number of the drawings from the National Gallery, which thus returned to their original location in East Berlin, however, the lot did not include Otto Mueller‘s water-colored chalk drawing "Zwei Mädchenakte". In 1958 it surfaced at Roman Norbert Ketterer's auction house in Stuttgart, which he had founded in 1946 and to which Wilma Zelck had regularly made consignments since 1949. [MvL]
More Information
+
Sell
Get a free appraisal for a similar object!
+
Register for
Otto Mueller
+
Buying from A-Z
+
Contact a specialist
+
Otto Mueller Biography
Share