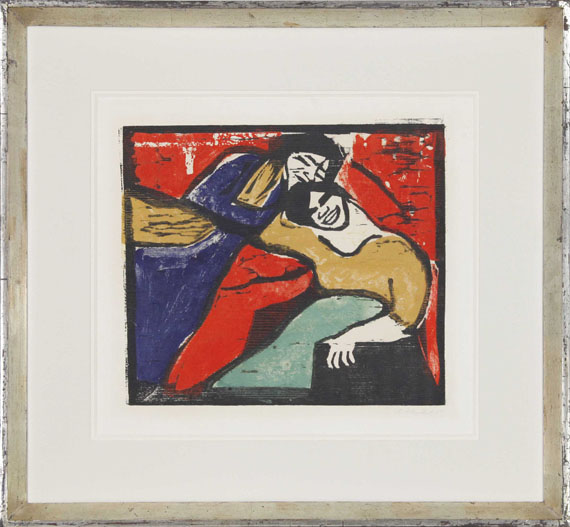 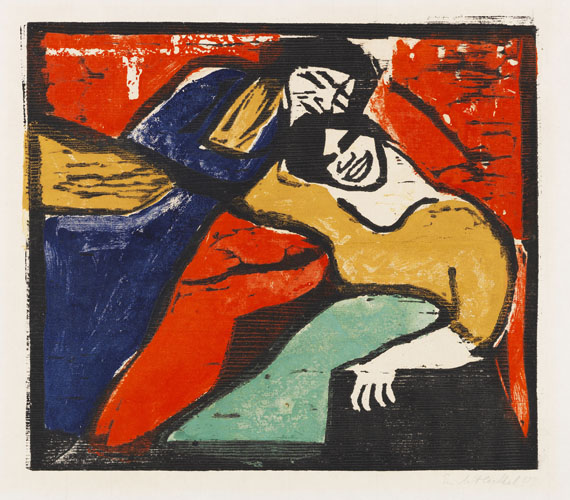 We are grateful to Mrs Renate Ebner and Mr Andreas Gabelmann, authors of the catalog raisonné of Erich Heckel's prints scheduled for release in October 2021, for their kind expert advice.

In the 19th century, the woodcut technique had become a sophisticated reproduction method that allowed to reproduced even the finest nuances. The expressionist woodcut, on the other hand, was comparatively amateurish. The wooden blocks were no longer chosen according to how suitable they were to flawlessly work out all subtleties. They appreciated the material‘s resistance instead, its character, its grain should remain visible. They used strong surfaces instead of delicate lines, and rugged cuts instead of smooth shapes dominated the picture. This way, the woodcut did not only become a technique characteristic of Expressionism, but also made a significant contribution to its development, as it it forced the artist to translate space into surface. Erich Heckel played a decisive role in this development. The Hamburg collector and lover of graphic art Gustav Schiefler recalled Heckel's first visit in 1907: “He came from Dangast, where he had worked with Schmidt-Rottluff over the summer. His woodcuts were rough, but the form and proportions gave them a strong inner life. The attention he paid to the choice of material, the right kind of wood, demonstrates the care with which he pursued the possibilities of expression. [..] At that time I chose the portrait of an old, weathered Dangast shoemaker, which he had cut into a block of old oak from the moor, and the figure of a naked dancing girl ”(Gustav Schiefler, Meine Graphiksammlung, Hamburg 1974, p. 54). The two sheets clearly show the range of expressions that Heckel used and perhaps also the connection between expression and the materials used had, which unfortunately, can no longer be verified as almost all of Heckel's wooden blocks were destroyed in the Second World War. According to the catalog raisonné by Annemarie and Wolf-Dieter Dube, only two from before 1944 have survived: a wooden block cut on both sides for two early exhibition posters at the Oldenburg Museum and a wooden block of a "Bärtige Mann" (Bearded Man) from 1908, today at the Museum of Fine Arts in Boston. The Magdeburg Museum acquired a third wooden block at an early point which is considered lost today.
Occasionally Heckel also colored his woodcuts. Color woodcuts are relatively rare, but this is not the only reason why they are of such an outstanding importance. In both 1909 and 1910 Heckel created four color woodcuts, some of them are among the greatest creations of expressionist graphic art. With five colors the woodcut “Zwei Ruhende Frauen“ (Two Resting Women) is the most elaborate print. It was printed from two plates: a black plate and a sawed-up plate colored in red, blue, ocher and green. In the other color cuts with sawed-up plates the black is also printed with the cut-out parts so that the colors do not overlap. Only in the case of “Zwei Runde Frauen” the color areas were printed first, while the contours and black areas were placed over them with a second printing block. This is well visible in the print offered here, where the grain of the wood has left lighter traces in the black areas, so that the underlying colors shine through. The spatial situation is not easy to grasp. The title of the woodcut suggests reclined women. However, the posture of the right woman in an ocher yellow blouse and green skirt is contradictory. What else is striking are the slanted black lines in the red background, which might suggest a bed or a couch on top of which the apparently older woman in a blue dress with a yellow scarf lies. The dress and the legs seem to hang over the edge of the couch. The younger woman is sitting next to the couch in an armchair, her left forearm on the armrest. She has put her right arm underneath her partner and her head on her shoulder, so that the two women enter into an intimate relationship, which is also confirmed by the expression on their faces. But Heckel deliberately obscured these spatial relationships by means of a red background that does allow for any representational interpretations. The picture thus retains a latent tension, which contributes to the special charm of the sheet. However, this is also determined by the fact that it is a manual print and not a press print, in which the entire surface is transferred to the paper with even pressure. Differences in pressure only arise in the case of a larger edition due to wear and tear of the wooden block. The manual printing, on the other hand, depends on various factors, which means that the surfaces may not print evenly and that they may vary in intensity, or can even tear apart. This creates sheets that differ from print to print. They retain the artist's handwriting more strongly than press prints and are therefore of a nature closer to unique objects.
Andreas Hüneke
More Information
+
Sell
Get a free appraisal for a similar object!
+
Register for
Erich Heckel
+
Buying from A-Z
+
Contact a specialist
+
Erich Heckel Biography
Share