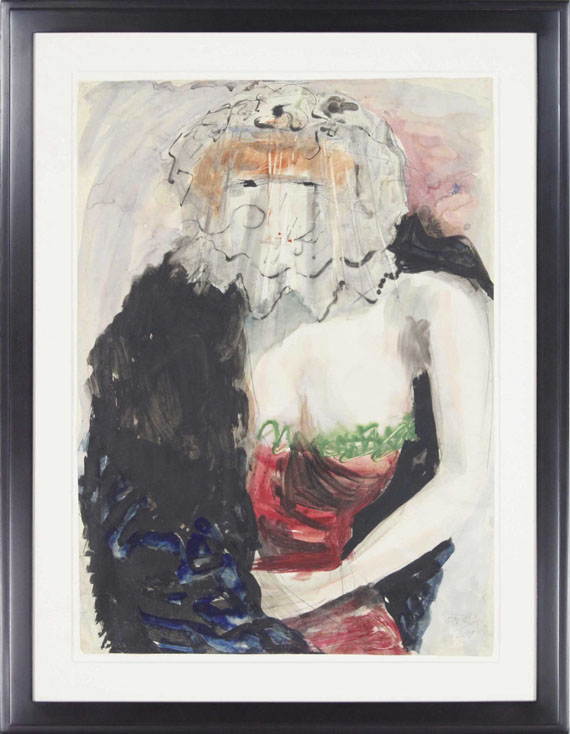 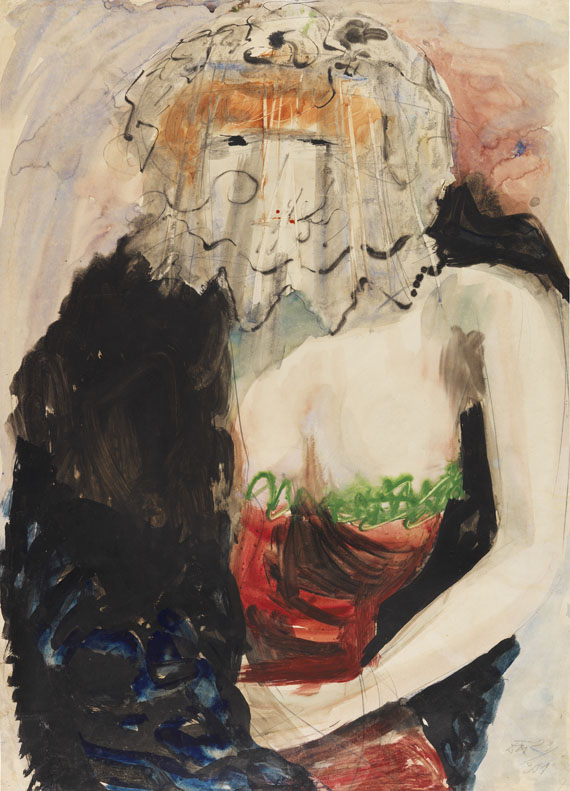 LITERATURE: Hauswedell & Nolte, Hamburg, June 2 - June 4, 1976, 214th auction, lot 343.
Villa Grisebach, Berlin, May 26, 2006, lot 59.
"I never made any written avowals, since, as you will see, my pictures are the most honest testimonials of these days. And I am not willing to allow the astonished contemporary to explore the depth of my soul. Those who have eyes may use them!"
Otto Dix to Hans Kinkel, 1948, quote from: Dix in Düsseldorf, ex. cat Galerie Remmert und Barth, Düsseldorf, 2011, p. 120

The social upheavals that the First World War brought with it provided material for a disillusioned generation of post-war artists that was occupied with the ruptured social order. The outsiders of society, especially the prostitutes, had already aroused the interest of the Expressionists before the First World War, if one only thinks of the famous street scenes by E. L. Kirchner from 1910/11. Dix discovers this world after the traumatic experiences of the war. In contrast to the expressionists of the pre-war period, he saw the individual fate of the rootless on their desperate quest for petty-bourgeois happiness that society can no longer offer them. In 1922/23 he created a series of watercolors with women as the preferred motif. However, Dix did not choose the type of the beautiful or idealized woman, but looked for his models in the Bohemian world and the demimonde. The sensory stimuli of the city of Düsseldorf had a particularly strong impact on the artist. At the invitation of the art dealer Johanna Ey, the artist was living in Düsseldorf from 1923 and this is also where the key works of his oeuvre of watercolors was created. With his typical, sharp dissecting look he captured "Die Dame mit Pelzmantel" (The Lady with a Fur Coat). Her facial features can only be made out vaguely, hidden behind a veil that often appeared in many female portraits 1923. For one thing, it adds a mysterious appeal to the women, but it also hides the truth of decay and neglect. The free application of paint and quick brushstrokes testify to an immediate implementation of the experience. Dix does not portray an individual person here, but lets the model primarily function as a social existence. He drafts a social typology in which all social classes are represented, from the demimonde to the bourgeoisie. [SM]
More Information
+
Sell
Get a free appraisal for a similar object!
+
Register for
Otto Dix
+
Buying from A-Z
+
Contact a specialist
+
Otto Dix Biography
Share