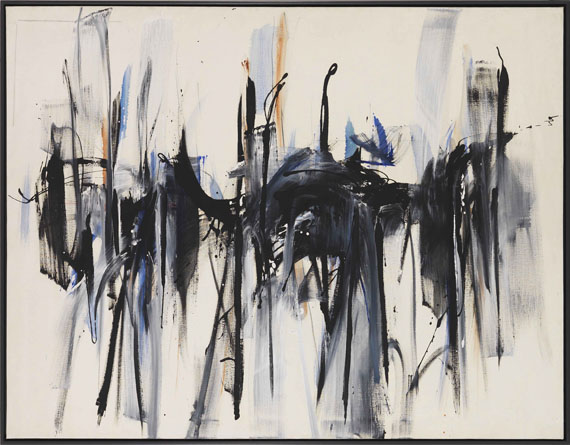 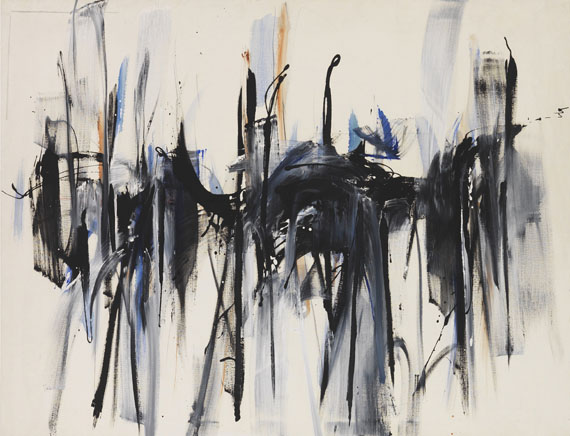 • This is the first time ever that the work is offered on the international auction market.
• Peter Brüning is the poet of German Informalism.
• Airy and rhythmic composition from the heyday of Informalism.

Peter Brüning, who grew up in an art-loving family, began to work artistically at a young age. From 1950 Brüning studied at the Academy of Fine Arts in Stuttgart and initially found orientation with the style of his teacher Willi Baumeister and his role models Fernand Léger and Pablo Picasso. The examination of Expressionism and Cubism led Brüning to an own style within his multi-faceted early work, in which drawing played a special role. During a two-year stay in Soisy-sur-Seine near Paris Brüning extensively toured France and was in direct contact with the art metropolis. In 1953 Brüning, along with Gerhard Hoehme and Winfred Gaul, founded the "Künstlergruppe Niederrhein", which Bernard Schultze and Karl Otto Götz also joined. Just one year later the group changed its name to "Gruppe 53". As a member of the younger generation, Peter Brüning was one of the most innovative protagonists of the German Informel and thus one of the most important representatives of this first German post-war style. Under the influence of French informal painting, Brüning became one of the most successful protagonists of this young art form. While his painting was initially characterized by dark colors and a dense style of painting, his style thinned out under the influence of his friend Cy Twombly, it became more gestural, more generous and more dynamic. The rhythmically moving brushstroke becomes more open and the lines dissolve towards the edges. Brüning found his pictorial language and attained first maturity in his work. In 1959 he developed a composition scheme that would determine his oeuvre for the next few years: linear-dynamic forms arranged around a horizontal center line. The gestural mesh of the lines forms a rhythm that determines the composition. Black calligraphic lines, varying in color density and line thickness, dominate. Brüning renders the characteristics of drawings onto the canvas and specifically integrates the white of the background into the composition. The result is a light and poetic composition, accentuated by a delicate color scheme of subdued blue and brown tones. The generously scattered gestural lines, as well as the delicate colors combine to form a vibrant spatial composition. [SM]
More Information
+
Sell
Get a free appraisal for a similar object!
+
Register for
Peter Brüning
+
Buying from A-Z
+
Contact a specialist
+
Peter Brüning Biography
Share