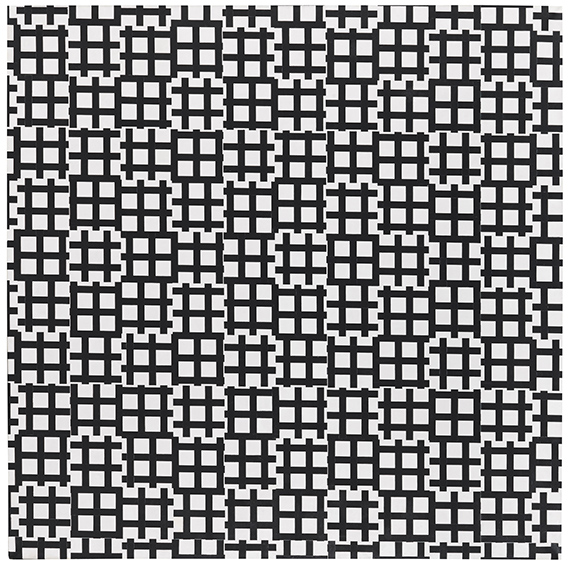 • The pioneer of Geometric Abstraction.
• As one of the founding members of the "Groupe de Recherche d'Art Visuel" ("GRAV", 1960-1968) Morellet was a key player of Op-Art and Kinetic Art from a very early point on.
• Documenta participant in 1968 and 1977.
• From the series "Tirets".
• François Morellet's basic principles of superimposing, serial arrangement and interference coalesce in this painting.

From the beginning of the 1950s François Morellet was occupied with the design of the image field as an infinite structure in which the image carrier no longer represents a mental limit. The design of the image field continues beyond the canvas. The autodidact found inspiration in the occupation with the work of Piet Mondrian. Under the influence of his work, François Morellet decided to create paintings that radically questioned the conventional concept of art. In addition to the work of Piet Mondrian, works and theories of Max Bill and Hans Arp also served him as a source of inspiration. But the extensive geometric ornaments, which he discovered in the Alhambra on a trip to Spain, made a lasting impression on him.
François Morellet refused to add any personal handwriting to his works. The phenomenology of the work results from predetermined mathematical formulas alone. By submitting the composition to the dictation of a formula, François Morellet lays down certain rules of the game that enable him to free himself from the arbitrariness of the composition: "At the same time [around 1951] I tried my hand at the arbitrariness of the composition, to distance myself from that of the format, the material and the color. " (Quote from: Fragen an Morellet, in François Morellet, Van Abbemuseum, Eindhoven, 1971, p. 3). Grids, lines or circle segments are grouped and resolved according to certain formulas. Through fragmentation, ordering, overlaying and interference, Morellet found fundamental methods for exploring form and space.
Here it is ‘dashes‘ (French: tiret) that form the basis. Dashes are punctuation marks that appear in the text as a sign of a brief pause in thought. Rows of dashes, offset in parallel, are overlaid by the same pattern with a rotation of 90 degrees and thus result in the motif. The pattern created in the painting is in its fullness and density in contrast to the original use of the dash, which is supposed to create space in thought. This reversal entirely corresponds to Morellet's concept of art. After all, in his satirical use of his apparently so coolly constructed motifs, he is often associated with Duchamp's concept of art.
"Tirets 0 ° / 90 °" creates a certain randomness of the forward and backward stepping of the structures, which contrasts with the optically uniform effect. The viewer pauses and is asked to review what has been seen. The “dash”, rotated 90 degrees, makes us examine, pause, and think. As early as in the 1950s François Morellet had repeatedly dealt with the "Tirets". A nice early example is "Two Warps and Wefts of Short Lines 0 ° 90 °" (1955/56) at Tate Gallery in London. The painting "2 Trames de Tirets 0 ° 90 °" (1972), which was previously in the Peter Stuyvesant Collection, shows a much more condensed appearance. Our work goes one step further by increasing the frequency of the dashes and partially interlocking the intersecting groupings of dashes in their boundaries. [EH]
More Information
+
Sell
Get a free appraisal for a similar object!
+
Register for
François Morellet
+
Buying from A-Z
+
Contact a specialist
+
François Morellet Biography
Share