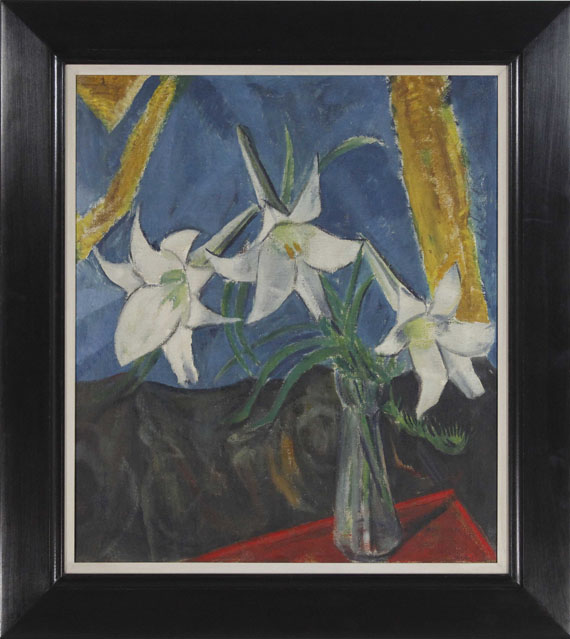 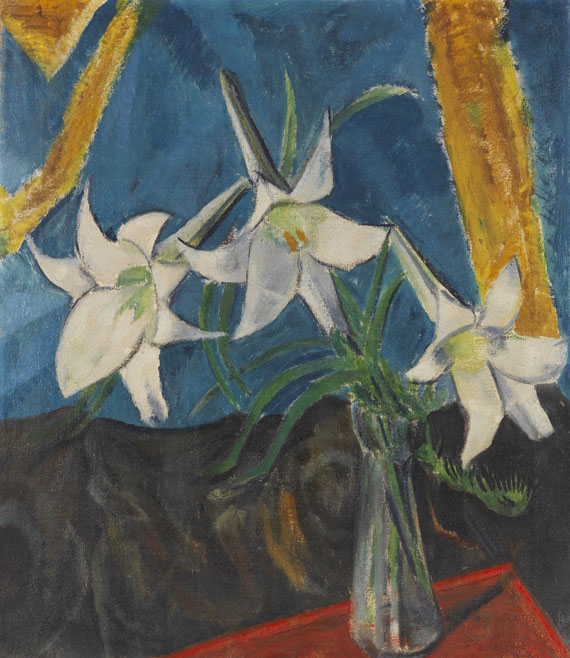 • One of the rare flower still lifes from the days of the Brücke
• Today many of Heckel's flower still lifes are considerd lost or destroyed
• Part of an American private collection for several generations
• Made at the artist's Berlin mansard studion which was adorned with blue burlap wall hangings painetd by the artist.

LITERATURE: Paul Vogt, Erich Heckel. Werkverzeichnis sämtlicher Gemälde, Wandmalereien und Plastiken, Recklinghausen 1965, cat. no. 1912/47, there mentioned as "whereabouts unknown".
"He [Heckel] received us in an attic adorned with colorful fabrics like a tent. [.] Many of his pictures, which we viewed one after another, were lined up behind gaudy self-dyed curtains."
Eberhard Grisebach, 1914, quote from: Hünecke, vol. 1, p. 386.

It is surprising that the expressionist Erich Heckel probably did not capture the eccentric forms of the lily blossom in any other flower still life, especially since the star-shaped, clearly contoured flower is particularly suitable for an expressive pictorial realization. However, taking a closer look at the development of Heckel's pictorial oeuvre, one quickly realizes that floral still lives are a rare things in his early expressionist period and would only become more common over the following decades. For example, in a work created fifteen years later, today part ofthe collection of the Buchheim Museum, Bernried, Heckel also staged the flower heads of the amaryllis –similar in form but with softer contours - in a glass vase on a small table placed in front of a painted wall hanging. In this work Heckel opted fora much softer style and chose a flower, the amaryllis, as subject of the picture, which until today is deemed a kind of signature flower of New Objectivity still life painting of the 1920s. As many of Erich Heckel's flowerstill lives from the "Brücke" period, and thus from his early expressionist phase, are considered destroyed or lost today according to Hüneke, and the painting "Lilien" is still listed in the first catalog raisonné by Paul Vogt with "whereabouts unknown", the reappearance of "Lillies" on the art market is one of the later and extremely pleasant rediscoveries of the important German protagonist of Expressionism. In "Lilies" the "Brücke" artist boldly placed the most formally expressionistic of all flowers in an energetic line in front of the blue background, which verifiably is a wall hanging the artist painted for his Berlin studio. In 1911 Heckel left Dresden forhe was in dire straits and relocatedto the art metropolis Berlin. In December 1911, Heckel and Sidi moved into the former studio of his fellow painter Otto Mueller in the attic of Mommsenstrasse 60. The historian Walter Kaesbach described the extremely poor living situation in retrospect as follows: "In order to get to their placeyou had to climb countless steps. At end of the climb you stoodin front of an iron door that led to a huge warehouse-like space. In one corner Erich and Sidi Heckel lived in a little shack built out of cardboardboxes and wooden boards. They had a little studio, a living room and a small kitchen. All the walls and the floorswere covered with sackcloth, which Heckel had painted himself. The self-made furniture - table, chairs, bed - was also covered with a beautiful blue sackcloth." (Quote from: Hüneke, vol. 1, p. 384). The brightstill life "Lilien", one of the earliest flower still lives created there, combinesthe poor yetextremely colorful and artistically exotic surroundings with the color impression of the flowers in the foreground to create a rich, picturesque color experience. Like "Lilies", the two flower still lives "Sonnenblumen" (1913, Städtische Kunsthalle Mannheim) and "Stilleben mit Mohn" (1913, Kulturstiftung Kurt and Barbara Alten, Ascona) bothshow a little partof the black and blue frieze withfigurative scenes in grisaille painting and the walls covered with a bright blue batik fabric, its ornamentation left in the nettle‘s natural color. The section of the red table at the bottom of the picture in close-up appears bold, which, in addition to the green and white flower formations and the ocher-colored line structure of the painted wall hanging in the background, makes for the composition’s powerful dynamic. Its particular strength lies in the strong reduction of the pictorial object. In "Lilien" the observer encounters Heckel‘s expressive, sharp-edged stylewhich would reach its peak in compositions madethe following year, especially in the brightblue and white cloud formations inthe painting "Gläserner Tag" (1913, Bavarian State Painting Collections, Munich). [JS]
More Information
+
Sell
Get a free appraisal for a similar object!
+
Register for
Erich Heckel
+
Buying from A-Z
+
Contact a specialist
+
Erich Heckel Biography
Share