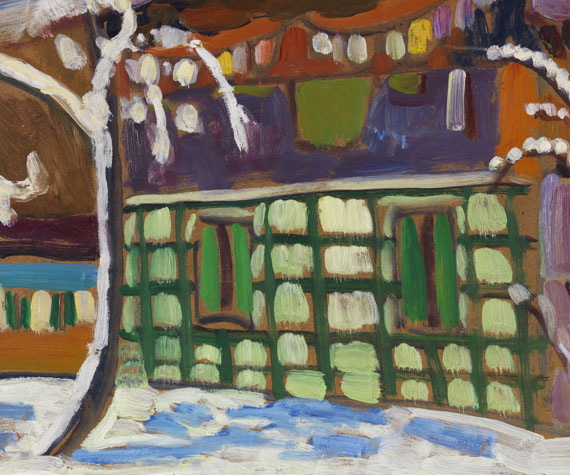 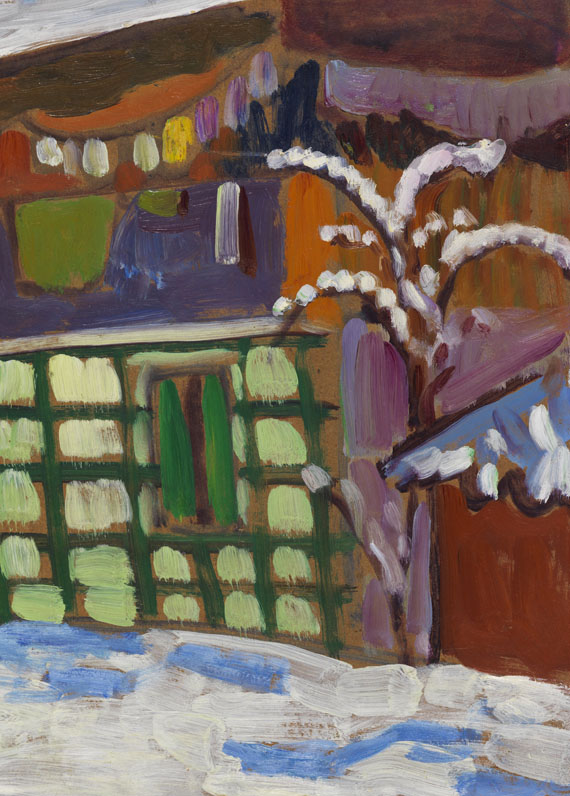 • From the important years of 1908/09 when Münter and Kandinsky settled in Murnau.
• Only very few Kochel townscapes by Gabriele Münter are in existence.
• From the artist's estate.

Accompanied by a photo expertise issued by the Gabriele Münter and Johannes Eichner Foundation on November 11, 2008.

Gabriele Münter paints a garden picture: a piece of a meadow densely covered with snow in front of a narrow, strongly focused section of a facade with a trellis and closed shutters, a loggia above it with laundry and colorful lanterns hanging on a line. Whatever parts of the building adjoin the facade to the right and left remains uncertain. Defoliated and snow-covered branches on young trees illustrate the freezing cold. Traces in the snow in bright blue deepen the impression of a scene executed immediately and emotionally and directly on the cardboard. The back is inscribed "Kochel Winter 08-09".
Münter and Kandinsky in Kochel
It was not until February 1909 that Gabriele Münter and Wassily Kandinsky traveled to Kochel where they met the composer and musician Thomas von Hartmann and his wife Olga. An intensive collaboration developed between Kandinsky and Hartmann, whom he still knew from his Moscow days: They discuss first ideas for Kandinsky's stage composition - in which movement, sound, light and music should form an abstract synthesis – in the snow-covered town of Kochel: "In February we went to the Hartmanns in Kochel," noted Münter in her journal. “First we drove to Garmisch - from there to Mittenwald by sledge (Mittenwald in snow was lovely!) - where we also worked on his compositions in the hotel. Then by sledge to Kochel! Stayed in Kochel with the Hartmanns for around 14 days. Together with K. Hartmann (very interesting, very talented) created the music for the 'Riesen' (Giants). ”(Quote from Annegret Hoberg, in: Gabriele Münter. Die Jahre mit Kandinsky. Photographien 1902–1914, Munich 2007, p. 31. ) With the "Riesen" Gabriele Münter means the scenario "Der gelbe Klang" (The Yellow Sound) which Kandinsky published Hartmann's stage music in the almanac "Der Blaue Reiter" in 1912. It is not a complete work in the traditional sense, but rather both a concept and a theoretical program for a stage work. The characters are nameless, abstract figures: five giants, so-called indistinct beings.
From copying nature to abstraction
A photograph shot by Kandinsky shows Münter in a winter coat painting “Grabkreuze in Kochel“ on the cemetery of the Kochel parish church. Kandinsky described working directly in front of nature , the anti-academic plein-air painting, as a basic requirement for artistic experience as early as in 1901 when he founded his own painting school Phalanx. Gabriele Münter, then his student and later Kandinsky’s partner, continued this practice for almost all of the years they would spend together in Murnau after they had returned to Munich from extensive trips in the summer of 1908. Something astonishing happened in Murnau in the autumn of 1908 when Kandinsky, Münter, Alexej von Jawlensky and Marianne von Werefkin met and painted in this Upper Bavarian town after long stays, especially in Italy and France: an artistic change, a radical rejection of the impressionist and late-impressionist painting style and a turn towards synthetic, expressive color painting. "After a short time of agony I made a big leap - from merely imitating nature - more or less impressionistic - to feeling a content - to abstracting - to giving an extract", wrote Gabriele Münter in retrospect of the events of the year 1911. With the painting "Haus mit Schneebäumen“ the artist delivers proof of the radical possibilities with which she reshaped what she saw, and, with an almost perspective-free conception of space, attained fascinating color compositions: The motif, laid out in contrasting color surfaces, is structured by colored contours, the striking facade with a trellis in the center of the composition is 'framed' by bold color nuances, emotional values between yellow and green, red and blue. If one compares Münter's and Kandinsky's paintings with one another, their great similarity is striking; the artist couple would never be closer than in those first Murnau years. [MvL]
More Information
+
Sell
Get a free appraisal for a similar object!
+
Register for
Gabriele Münter
+
Buying from A-Z
+
Contact a specialist
+
Gabriele Münter Biography
Share