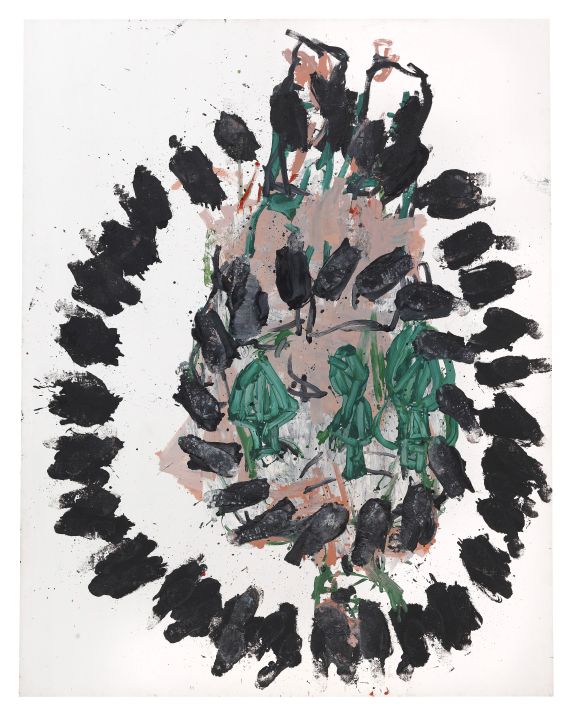 Georg Baselitz is considered one of the greatest representatives of German Contemporary Art, because of his remarkable artistic creation, which, on its quest to both overcome art-historical traditions and to make (art) history, has taken ever new directions since the 1960s. With his works Baselitz strives to violate determined art categories and rules, his unpretentious painting turns against established concepts of art. In 1963 the Berlin Public Prosecutor's Department confiscated the two paintings "Die große Nacht im Eimer" (The Big Night Down the Drain) and "Der nackte Mann" (The Naked Man) from the gallery Werner & Katz. Charges for displaying pornographic contents were dropped in 1965 and the works were returned. The first painting with the motif upside-down was made in 1969. This progressive step – an artistic act of liberation - eventually led to Baselitz` artistic trademark and earned him a spot in post-war German art history. "The painting process itself becomes emancipated from the image, which explains why the works appear both representational and at the same time non-representational. The reversion of the subject, a simple idea at first sight, leads to a fruitful conflict between figuration and abstraction both with regards to form and content." (Toni Stoss, in: Georg Baselitz, Gemälde und Skulpturen 1960-2008, p. 8). In 1980 Baselitz was main artist at the German Pavilion at the Venice Biennial and also participated in Documenta VII. Henceforth his artistic creation has been celebrated in numerous international exhibitions and retrospectives, among them one at the Guggenheim Museum in New York in 1995. The painting "Mäanderlied", impressive simply for its sheer size, was created by Baselitz from July 18 to August 2, 1991. Executed on a canvas spread out on the floor of his studio, it is a remarkable art-historical document of a work period commencing in the early 1990s, which is based on the expressive figurative choice of motifs characteristic of his ‘Hero Pictures‘ from the 1960s. However, now they are rendered on the raw canvas upside-down and in a more airy style, as well as in an interesting multilayered overpainting. Accordingly, the title of this work can also be understood as reference to a progressive and refined reversion of his own mode of operation. On top of that, Baselitz` "Mäanderlied" stands out for its remarkable provenance, as it used to be part of the collection of Alfred Neven DuMont up until the death of the renowned Cologne publisher in 2015. [JS]
More Information
+
Sell
Get a free appraisal for a similar object!
+
Register for
Georg Baselitz
+
Buying from A-Z
+
Contact a specialist
+
Georg Baselitz Biography
Share