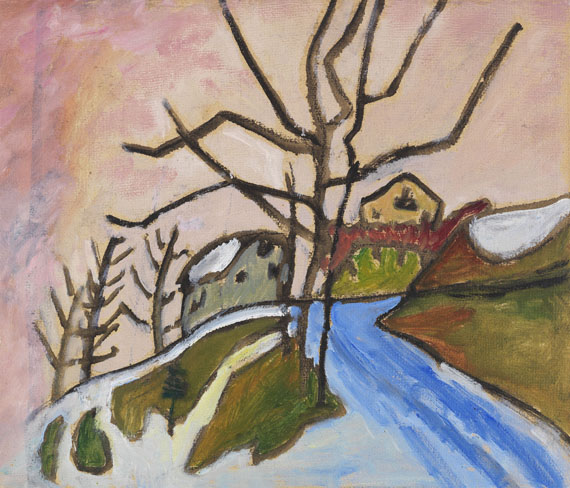 This work was made almost the same day the Blaue Reiter was founded in December 1911 .
With a written comfirmation from the Gabriele Münter- and Johannes Eichner-Foundation from 3rd August 2016 (in copy). The painting will be included into the catalog raisonné of paintings by Gabriele Münter.

Essay
With almost the same details as in the larger version of this subject, our winter landscape is still characterized by the initial impulses of her quest for composition, which adds particular appeal to this work. Instead of a well though-out composition, as it is the case with the winter landscape of the same name in larger format, this landscape lives on the color impulses that Münter had given up for her final version. The soft rose of the wintery sky enters in a felicitous symbiosis with the cool blue tone of the icy path, a symbiosis that decisively makes for the atmospheric value of this sparse landscape. It is always astonishing to see how such impulses can make the difference between two compositions with a similar graphic duct. The years before World War I marked the heyday of Gabriele Münter's artistic creation. She was able to overcome the divisionistic Late-Impressionism, which had characterized her earlier works, under the influence of Kandinsky. She turned towards a boldness that would coin her entire later period of creation. Münter's contoured color field painting became the most striking property of works from those days. A sublime coloring underlines the graphic element without diluting the expressiveness through a pictorial effect. [KD]
More Information
+
Sell
Would you like to sell a similar object?
+
Register for
Gabriele Münter
+
Buying from A-Z
+
Contact a specialist
+
Gabriele Münter Biography
Share 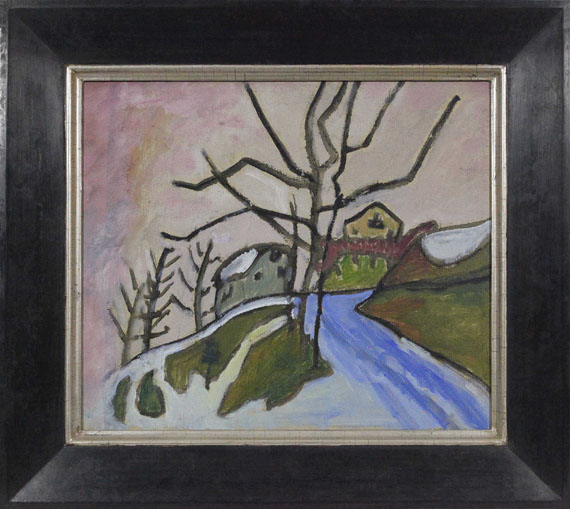