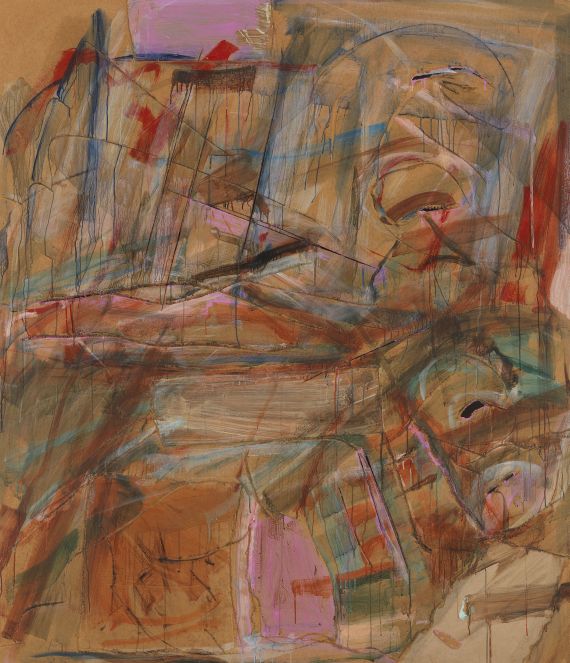 Klaus Wolf Knoebel was born on 31 December 1940, spent his childhood near Dresden and moved with his family to Mainz in 1950. In 1962-64, while attending the Werkkunstschule in Darmstadt, he took part in Constructivist and structural composition courses modelled on the idea of the preliminary courses taught by Johannes Itten and Lászlo Moholy-Nagy at the Bauhaus. There he met Rainer Giese, both adopted the first name Imi, a shortening the friends used as a farewell. Fascinated by Joseph Beuys's teaching, they transferred to the Düsseldorf Art Academy in 1964, where they contrasted to the other Beuys' students. In 1968 Knoebel created his first important work, the installation 'Raum 19', named after classroom 19 at the academy, which Beuys made available to the students. Already then Knoebel studied the relationship between space, picture support and color in analytical series. He was indebted to a second guiding spirit, Kasimir Malevich, for the idea of reduction of a painting to its elemental co-ordinates. Following on purist linear pictures, light projections and white pictures (1972-75), Knoebel first used color in 1974. Since 1975 until today Knoebel has worked on the so-called ‚Mennigebilder', named after the anticorrosion paint Mennige, which the artist uses in that piece of art. In the second half of the 1970s he turned to overlapping color quadrilaterals painted cinnabar red and ultimately to lurid, gestural and expressive use of color on layered plywood and metal plates positioned in a specific spatial relationship.

In addition to one-man shows in museums, including Düsseldorf (1975), Winterthur and Bonn (1983) as well as Hamburg (1992), Knoebel has also participated in major group shows such as documenta 5, 6, 7 and 8. The Haus der Kunst in Munich mounted a large retrospective of his work in 1996. Knoebel doubtlessly counts among the most important contemporary artists . His radical and remarkably stringent oevre will be subject of a new retrospective at the Kunstmuseum Wolfsburg in October 2014.