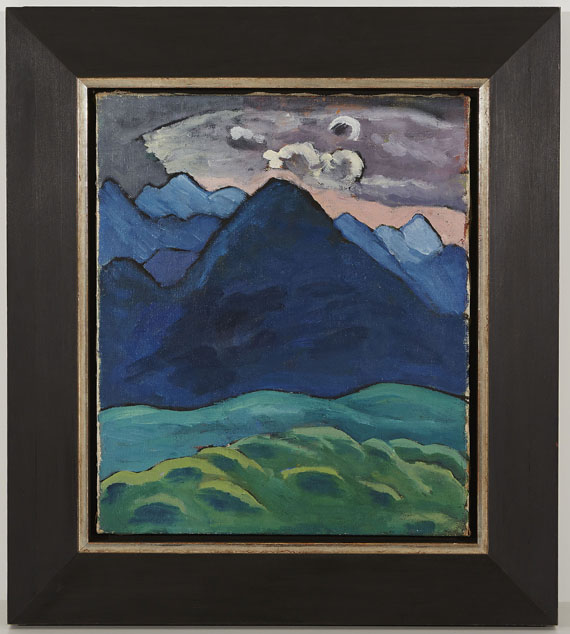 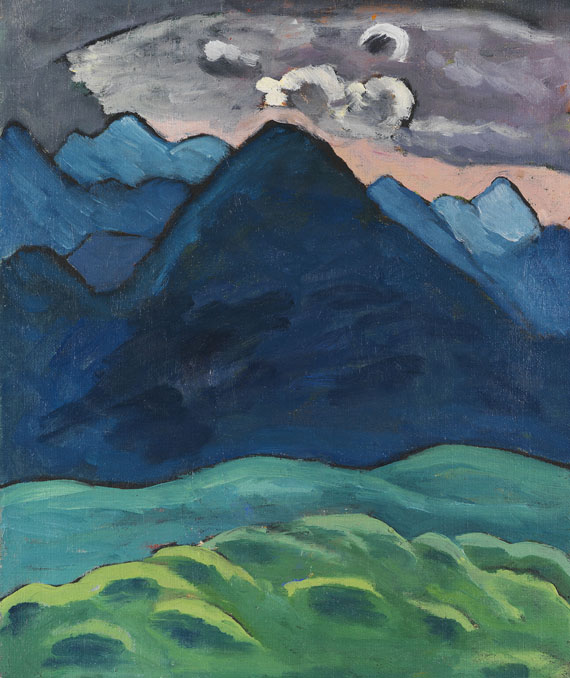 Accompanied by written confirmation issued by Gabriele Münter- and Johannes Eichner-Foundation, Munich, dated 1 October, 2013. The work will be included into the catalog raisonné of paintings by Gabriele Münter.

Gabriele Münter received her first art lessons at the 'Damen-Kunstschule' (Ladies Art School) in Düsseldorf and then attended the Society of Woman Artists as M. Dasio's and A. Jank's pupil. Then she went to Munich where she visited the private art school 'Phalanx' which was run by Wassily Kandinsky. In 1904 Münter and Kandinsky began travelling together: to Holland, Italy, France - where they met Rousseau and Matisse - and elsewhere. Stylistically she now distanced herself from Impressionism and her works began showing Fauve and Expressionist influences. In 1908 she and Kandinsky began leading a calmer life in their apartment in Munich. They often met with Klee, Marc, Macke, Jawlensky and Marianne von Werefkin. The country house Münter bought in Murnau provided an ideal working environment. In 1909 the artist began painting glass, a medium which would later also be adopted by Kandinsky, Marc, Macke and Campendonk. Münter was a member of the 'Neue Künstlervereinigung München' for two years and in 1911 she joined the 'Blaue Reiter', the artist group founded by Kandinsky and Marc. She was interested in Kandinsky's development towards abstract art, but her own works continued to be figurative. Her landscapes, figurative scenes and portraits show a reduction to the essential with an inclination towards humorous characterisation. When war broke out, Münter and Kandinsky at first moved to Switzerland. Münter, however, decided a year later to go to Stockholm, where she separated from Kandinsky. In late autumn 1917 she moved to Copenhagen. She travelled a lot during the 1920s and spent some time in Munich, Murnau, Cologne and Berlin.

The acquaintance with Dr. Johannes Eichner enabled the artist to regain personal balance. As far as her art is concerned, she resorts to compositions from the days of the"Blaue Reiter". Her art appears again in the characteristic closed style. A mixture of a naiveperspective, showing resonances of earlier rear glass paintings, and a factual rationalization of the image help Münter to rediscover a path in painting that was relevant during the difficult 1930s. She reduces expression to its most fundamental elementsand thus attains an atmospheric effect.

After 1931 she spent most of her time in Murnau and Munich. In 1956 she received the Culture Prize of the City of Munich. The year 1960 saw the first exhibition of Münter's work in the US, followed in 1961 by a large show in the Mannheim Kunsthalle. The artist died in her house at Murnau on 19 May 1962. [EH].