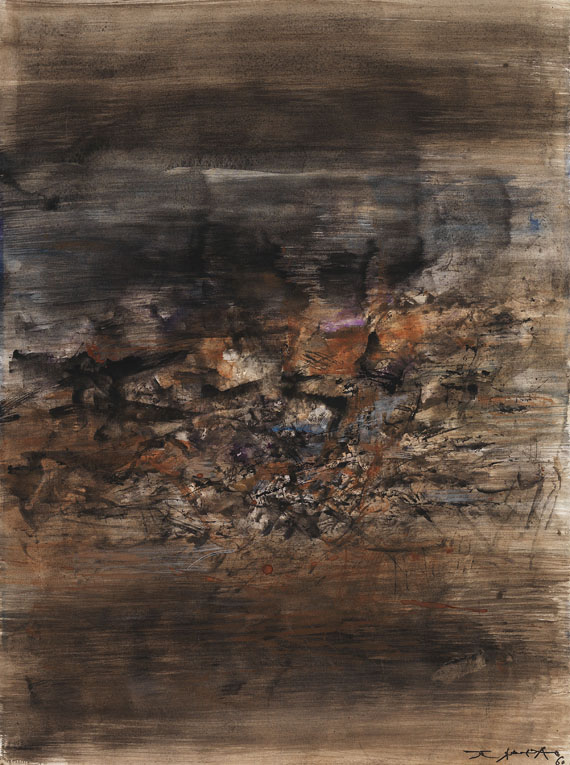 Accompanied by a certificate of authenticity issued by the Fondation Zao Wou-Ki, Geneva, dated 09 November, 2012.

At the tender age of fourteen, Zao Wu-Ki began to study oil painting at Hangchow (Hangzhou) Art Academy. Between 1941 and 1947 he was a professor there and had his first one-man show. The young artist was greatly impressed by the European moderns. In 1948 Wu-Ki emigrated to Paris, where he met Henri Michaux, Alberto Giacometti, Joan Miró and Maria Elena Vieira da Silva. In Paris Wu-Ki took courses at the Académie de la Grande Chaumière and learnt lithography. Only a year after his arrival Wu-Ki had his first solo show in Paris, at the Galerie Creuze, which would be followed by others across Europe. Taking Paul Klee as his model, Wu-Ki increasingly distanced himself from representational painting, turning instead to a synthesis of Eastern calligraphy and European Informel. His poetic abstract pictures evoke associations of landscape and cosmic implications. In 1953 Wu-Ki designed the scenery and costumes for the R. Petit ballet 'La Perle'. In 1955 Wu-Ki was awarded with the prestigious Carnegie Prize in Pittsburgh. Zao Wu-Ki travelled through the US in 1957/58.

This work by the French-Chinese artist Zao Wou-Ki is, just as the oil painting offered in this auction, particularly captivating for the decent and yet expressive coloring and the combination on surfaces applied with a broad stroke of the brush and delicate, almost drawing-like line formations. Zao Wou-Ki endows the watercolor with a special charm through the blue and purple accents that stick out from the composition’s black-brown shades.

In 1964 he was naturalised as a French citizen and had his first large-scale retrospective at the Folkwang Museum in Essen in 1965. In the 1970s Zao Wu-Ki went to China several times and embarked on a series of paintings in the Chinese tradition in India ink. As a friend of H. Michaux and André Malraux, Wu-Ki collaborated on numerous illustration projects. In 1980 he was appointed professor at the École Nationale upérieure des Arts décoratifs. In the 1990s Zao Wu-Ki was given several honorary doctorates and was distinguished with the Japanese Premium Imperial Award. His work has been shown regularly at major international exhibitions, including the 1996 Venice Biennale. [KH].