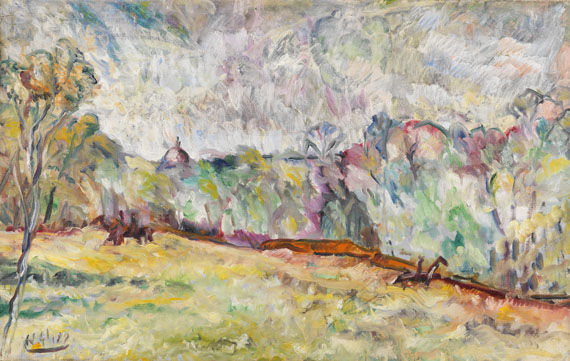 After he pursued a career of a military officer, Wilhelm von Hillern-Flinsch turned to painting as of 1918 and went to Munich. After several study trips and private art lessons, he was accepted into the Munich Academy in 1924, however, he soon dropped out again. His stylistic development went from Naturalism and Impressionism, over a remarkable baroque-solemn Realism to Expressionism. The painter developed his work with a remarkable consistency and is always open for new things, at the age of 52, for instance, he attended the Berlin Academy of Arts and learned to make lithographs. [DB]

More Information
+
Sell
Get a free appraisal for a similar object!
+
Register for
Wilhelm von Hillern-Flinsch
+
Buying from A-Z
+
Contact a specialist
Share