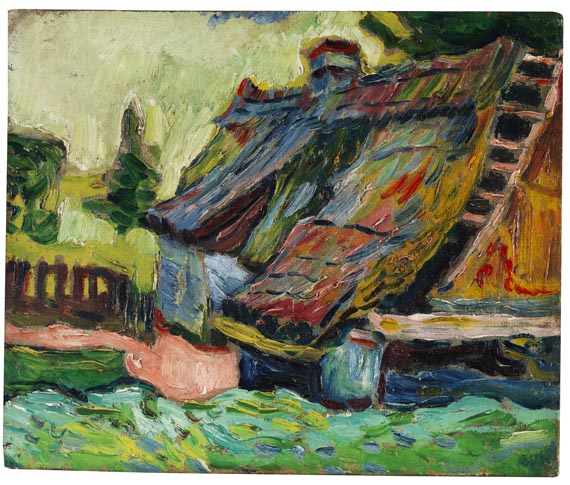 Accompanied by a certificate of authenticity issued by Prof. Dr. Leopold Reidemeister, Brücke-Museum Berlin, dated 17 December 1985.
Accompanied by photo expertise issued by Max K. Pechstein, Hamburg, April 1986.
The painting will be included into the forthcoming catalog raisonné of painting under the number 1906//3. The catalog is prepared by Dr. Aya Soika.

Max Pechstein's artistic talent was discovered and encouraged at a very early age. His conventional career, first as an apprentice with a Zwickau painting master, then at the Dresden School of Applied Arts and finally at the Dresden Academy under the decorative painter Otto Gußmann, provided Pechstein with a sound craftsmanship. His ceiling painting at the Dresden Arts and Crafts Exhibition in 1906, with such an unconventional color scheme that the organizers had it sprayed with gray paint to soften the colors, attracted Erich Heckel's attention. He then invited Pechstein to join the artist group ’Die Brücke' which had been founded the year before in opposition to Impressionism. The group's aim was to "attract all revolutionary and restless forces" (Schmidt-Rottluff) and an emphasis of the power of color in painting. In this environment Pechstein's Expressionist style developed further, concentrating on elaborating the focal point of the painting with a sparse painting technique. Pechstein moved to Berlin.

The painting "Zerfallenes Haus" (House in Ruins), which Pechstein made in either 1906 or 1907, just shortly after he joined the ’Brücke’, is chief witness of a fundamental change of the painter‘s concept of art. Similar to the work "Eliasfriedhof in Dresden" (1906, Brücke-Museum, Berlin) this early expressionist work by Pechstein is also a document of his renunciation of the then officially acknowledged Symbolism. With "Zerfallenes Haus" the artist, who had received an excellent academic education, makes a clear decision in favor of avant-garde art. This is clearly spelled out by the picture’s theme, instead of fashionable ornate figures Pechstein painted a simple cottage - and this he did in a nothing but revolutionary style: Inspired by works by van Gogh, Pechstein abandons all rules of academic art – perspective, technique, composition. With sketchy and intense strokes of the brush he adds almost haptic structures to the thickly applied, strong and expressive colors. It was for his quick way of painting that Pechstein attains outmost concentration in "Zerfallenes Haus", thus reaching the kernel of artistic creation.

In 1908 and became a co-founder of the ’Neue Sezession'. He painted figures, still lifes and landscapes in a moderately Expressionist style. Perhaps it was this, which lead to the artist's early and continuing success. From 1945 Pechstein taught at the Berlin Art Academy. Before that time, during the Third Reich, he was slandered as a "degenerate" artist. Apart from paintings his oeuvre includes more than 850 woodcuts, lithographs and engravings. [ATh].