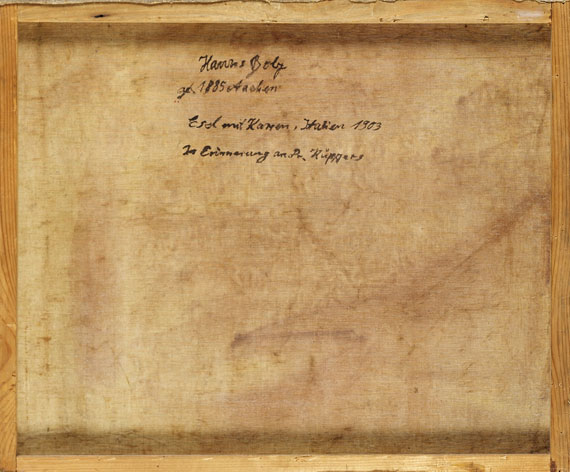 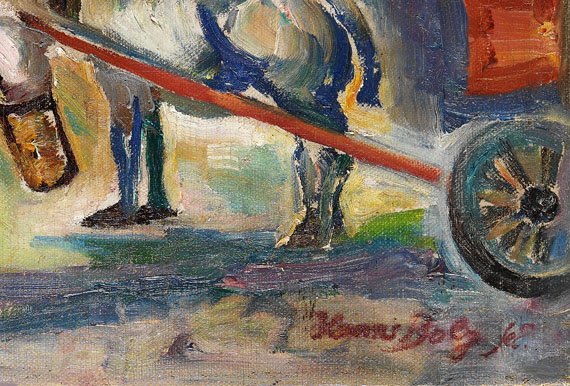 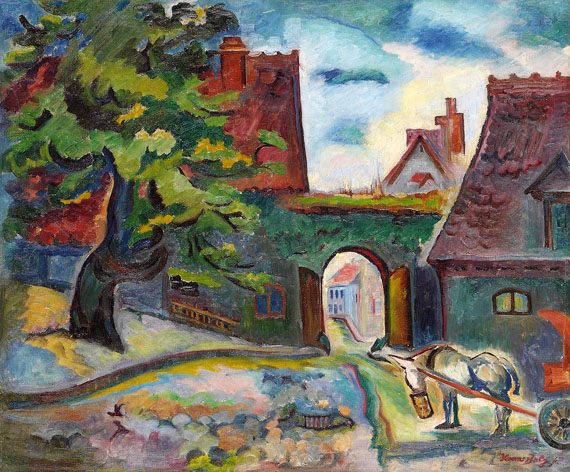 Hanns Bolz presumably completed his studies at the Düsseldorf art academy around 1905/08. In the following he went to Paris where he spent most of the time until the war broke out. He rented a studio on the Montmartre, in rue Gabrielle 49, which had been used previously by Pablo Picasso. He was a regular guest in the Café du Dome and was soon part of the small German artist colony, which had gathered around Purrmann and Levy. This must have also been the latest point for him to become acquainted with the art dealer Alfred Flechtheim, who showed works of the illustrious and heterogeneous "Domiers" in his gallery in 1914 for the first time. Based in Paris, Bolz went on various short trips and made Munich his ‘second‘ home town. By 1911/12 he had become integrated into the circle of the Schwabingen Bohemians and made a name for himself as, among others, satirical illustrator for the magazine "Komet". Bolz showed works on all important exhibitions in his days. He took part in the "Sonderbund" exhibition in Cologne in 1912, the Armory Show in New York and Chicago and in Herwarth Walden's 1st Deutscher Herbstsalon (German Fall Salon ) in Berlin in 1913. Together with Wassily Kandinsky he showed works in the Aachen Reiff-Museum in 1913. He designed the cover of Herwarth Walden’s “Sturm“ magazine several times in 1912/13

A liking for the caricature, which Bolz particularly expresses in his drawings, can also be observed in this painting. It shows a small-town scenery with a narrow town gate in front of which a waiting donkey is depicted. The absence of any people hints at the community’s drowsiness. The coloring is modestly modulating, as it is typical of Bolz. The tree’s foliage shows his reference to Cézanne. A stage-like composition can be detected in this drawing, similar to that in the Parisian street pictures.

The artist was drafted for military service in 1914 and was sent to the front, where he suffered a severe gas poisoning that left him partially blind. He was released from military service ahead of time and died in 1918 from the consequences of his poisoning. Otto Freundlich wrote a haunting obituary for his long-time friend and companion in the magazine "Die Aktion". In 1922 Flechtheim showed a large commemorative exhibition in Düsseldorf and Berlin. [KD].