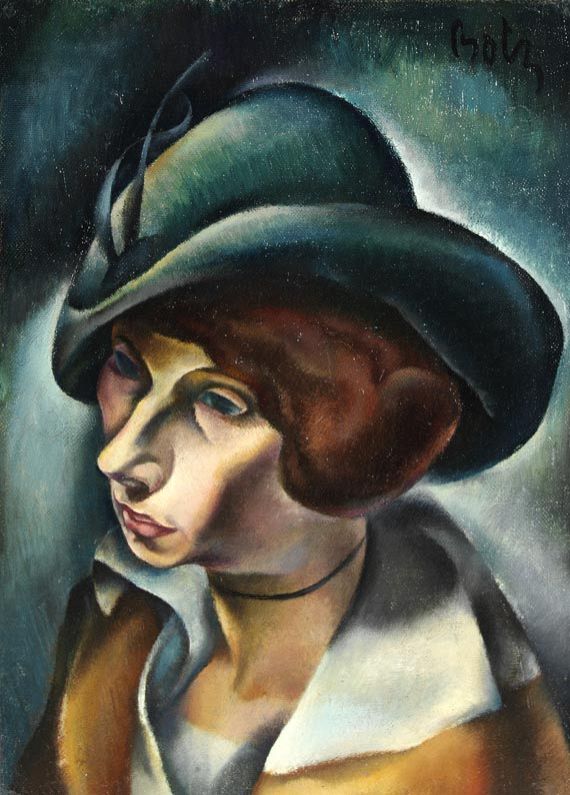 This work's authenticity has kindly been confirmed orally by Ernst Cremer.

Hanns Bolz finished his studies at the Düsseldorf Art Academy, probably during years 1905-08, before going to Paris, where he spent most of his time before the first world war broke out. The Montmartre studio he rented at 49 rue Gabrielle had previously been used by Pablo Picasso. Hanns Bolz frequented the Café du Dome and soon belonged to the small German artists’ colony that had grown up around Purrmann and Levy. Here at the latest, Bolz must have met the art dealer Alfred Flechtheim, who showed the work by the distinguished “Domiers” circle with its heterogeneous medley of styles at his gallery for the first time in 1914.
Like the Bolz portrait of Alfred Flechtheim, which Ketterer Kunst sold so successfully at auction in December 2008, the present portrait of a lady wearing a hat reveals traces of Cézanne’s influence, in both form and palette. During his Paris years, Hanns Bolz was under the sway of late 19th-century French painting and assimilated it in his own work. The salient features of the present portrait coincide with those of the Flechtheim portrait, notably in the sculptural, cubic details such as the rendering of the nose and mouth, which determine the character of the portrait. The subject’s eyes, which are regarded as the vehicle for psychological expression as the window of the soul, are, on the other hand, shadowed in this portrait by the hat. The dynamic of the picture surface is created by diagonal pictorial elements and the hat itself, which dramatically shapes the composition. Hanns Bolz has united elements of style here that go back as far as the Baroque portrait. Particular weight in the overall effect created by the composition is attached to the palette, which, cool as it is, counteracts to some extent the vehemence and verve of the determining diagonals.
Bolz undertook numerous short trips from Paris. Munich became his “adopted country”. By 1911-12, he was integrated in the Schwabing bohemian circles and had made a name for himself inter alia as a satirical illustrator. He participated in the 1912 Sonderbund exhibition in Cologne, the Armory Shows in New York and Chicago and in 1913 in Herwarth Walden’s 1st German Autumn Salon in Berlin. Bolz’s work clearly shows his study of Cubism and Fauvism. By 1912 he was even experimenting with abstract pictorial figurations. In 1914 the artist was conscripted. He suffered severe gassing at the Front, which partly blinded him. Discharged prematurely from the armed forces, he died in 1918 of complications from the gassing. In 1922 Flechtheim show a large memorial retrospective of his work in Düsseldorf and Berlin. Hanns Bolz, whose œuvre has survived only in fragments, is one of the most important artists of his time. The avant-garde work by this artist who met such an untimely end must be rediscovered and appreciated as an important contribution to Classic Modernism. [KD].