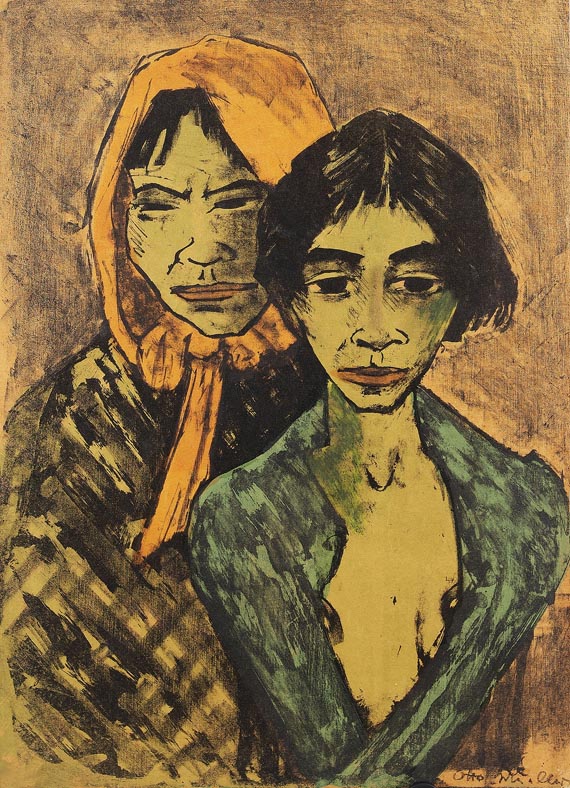 Zwei Zigeunerinnen (Zigeunermutter mit Tochter). 1926/27.
Lithograph in colours with an additional colour application in green.
Karsch 161/II. Signed. With monogram and estate stamp on verso (Lugt 1829 d). On of ca. 60 copies. On yellow machine-made laid paper. 69,5 : 50,2 cm (27,3 : 19,7 in), the full sheet. One of the most impressive sheets from the gypsy series, doubtlessly marking the highlight of the artists creation in terms of conception and execution. Otto Mueller was inspired by the charme of the gypsy life like no other artist of those days. Formative impressions made on a journey through the Balkan region in 1924, for some time he even lives with gypsies, and congenially visualises those impressions in this series, expressing a longing for freedom and independence, which can be found in the lithographs in colours as well as a decent erotic. [KD]

Plate 2 from the series "Zigeuner" (Gypsys), released by the gallery Neumann-Nierendorf, Berlin 1927. Fine impression in decent colouring, partly differing from the reproduction by Karsch. The faces and the upper part of the daughter's body in a pale green instead of ochre. The shining light son the nose's bridge have been masked. The mother's head scarf more in brick red than in crimson. The shady parts on the daughter's neck and face have been tinted
In good condition. Corners and left edge minimally bumped, edges with tiny pinholes. Small split to centere of upper margin. With few insignificant craese marks.