Photographs from the Victor Martin-Malburet Collection, Ketterer Kunst Online Only Auction on July 15, from 3 p. m.
Icons Of The Space Age A Visual Legacy 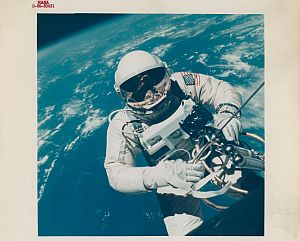 Lot 25 - James McDivitt [Gemini IV], 3-7 June 1965,
The first photograph of a human being in space:
Ed White during the first American EVA
Vintage chromogenic print on fiber-based Kodak paper
printed 1965, 20.3 x 25.4cm
Staring price: : € 100
Estimate: € 5,000-7,000
Munich, June 14, 2021 (KK) – These photographs not only allowed for spectacular insight into unknown worlds, they also changed the way we see our planet. A total of 277 lots, comprising 377 iconic, original photographs, will be called up in the Ketterer Kunst Online Only Auction on July 15th. Each lot has a starting price of € 100. Bids can be submitted from June 20th on www.ketterer-internet-auctions.com.

All shots were made between 1958 and 1972 and come from the acclaimed Victor Martin-Malburet Collection. Comprising more than 3000 NASA vintage photographs from the early days of space travel to the triumphant Apollo missions, the collection is nothing less than the most beautiful and most fascinating visual legacy of the 20th century. The earliest man-made pictures in the collection were shot by John Glenn, America's first astronaut in orbit, while the last ones were shot by Eugene Cernan, the captain of Apollo 17 and the last man on the moon.

For more than 15 years, the Paris-based curator and art collector Victor Martin-Malburet (38) compiled the most extensive and most significant collection of original NASA photographs with a strong passion for space adventure and great attention to detail. They cover the launch of Mercury, as well as both the tremendous technological progress achieved through Gemini and the successful moon landing during the Apollo program.

"The photographs capture the very moment science fiction becomes reality," is how auctioneer Gudrun Ketterer explains her fascination for the collection. "It was both the golden age of space exploration and a seminal moment in the history of photography, where the artistic legacy of space pioneers remains so to speak."

Victor Martin-Malburet explains: "Astronauts must have been the most venturous photographers of all time. In space-suits and -capsules that offered little protection, they skillfully captured sensational views that still evoke awe and amazement today. To me these photographs are both artworks and monuments of contemporary history. They inspire the observer, make us reflect, give us hope, make us feel humble, brave, and, most of all, teach us to be grateful."

Collection highlights have been shown in exhibitions at the Louisiana Museum for Modern Art in Copenhagen, the Grand Palais in Paris, the Kunsthaus Zürich, the Museum der Moderne in Salzburg and the Onstad Kunstcenter in Oslo.

While the photographs are still products of the analog era, the astronauts received state-of-the-art training from leading companies such as Hasselblad, Kodak and Zeiss, as well as lessons from the best photographers working for magazines including "Life" and "National Geographic". In this way pilots, scientists, engineers and astronauts took on the role of photo artists as well. 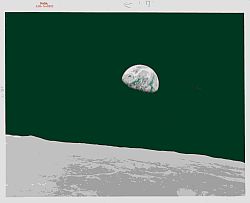 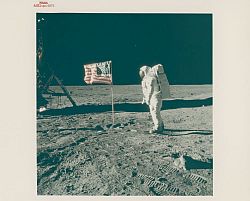 Lot 133 - Neil Armstrong [Apollo 11], 16-24 July 1969
Buzz Aldrin posing for a photograph beside the US flag Vintage chromogenic print on fiber-based Kodak paper
printed 1969, 20.3 x 25.4 cm
Starting price: € 100
Estimate: € 2,500-4,000
"These are epic masterworks of exceptional beauty", says Gudrun Ketterer. "They tell the fascinating story of space travel and give us unprecedented impressions of uncharted moon landscapes. The camera shot looking back onto Earth must have had the most significant impact on mankind. The miraculous nature of our own planet, together with its vulnerability only became fathomable through perspective from outer space. Accordingly, these images once and forever changed our understanding of the world and our role in the universe."

In the 1960s and early 1970s many of the photographs published by NASA became milestones of popular culture. Furthermore, they strongly impacted the development of a new environmental awareness. 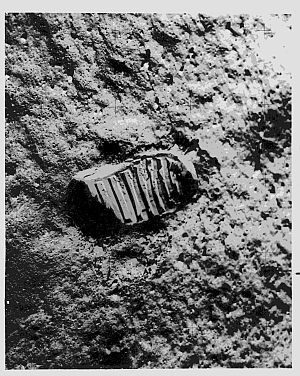 Lot 135 - Buzz Aldrin [Apollo 11], 16-24 July 1969
The footprint on the Moon
Vintage gelatin silver print on fiber-based paper,
printed 1969, 20.3 x 25.4 cm
Starting: € 100
Estimate: € 5,000-7,000
The full significance of the rich photographic yield, collected by the astronauts remained hidden from the public eye for decades. Only authorized scientists could access the majority of photographs stored in the NASA archives at the Manned Spacecraft Center, known today as the Johnson Space Center, in Houston, Texas. Among them were rare panoramica depicting astronauts walking on the moon and the first shot of planet Earth rising above the horizon.

The artworks offered in the auction contain original NASA stamps, captions and identification numbers. In many cases the collector Victor Martin-Malburet was able to allocate personal and often emotional remarks the astronauts made during the photo shooting. This tells the so far unknown visual tales of one of mankind's greatest adventures.

From the mission transcript of the shooting of "Earthrise" (lots 80 and 81):

Anders: Oh, my God! Look at that picture over there!
Here's the Earth coming up. Wow, is that pretty!
Borman: Hey, don't take that, it's not scheduled. (Chuckle.)
Anders: [Laughter.] You got a color film, Jim?
Anders: Hand me that roll of color quick, will you...
Lovell: Oh man, that's great!

The German ESA astronaut Ulf Merbold, who will turn 80 years old in June of this year, was the only German to fly into space three times. Ketterer Kunst talked to him about his missions, his adventures and about photography in an environment void of oxygen. The interview with Ulf Merbold will be published in the Online Only Auction's catalog and on www.kettererkunst.com.

Ketterer Kunst (www.kettererkunst.com and www.ketterer-internet-auctions.com) was founded in 1954. It is head-quartered in Munich with bases in Hamburg, Duesseldorf and Berlin as well as a global network of representatives in, among others, the USA and Brazil. It is one of the leading houses for Fine Art Auctions from the 19th to 21st Century and Rare Books. As market leader for 19th to 21st Century Art in the German language region, as well as, according to a report pbulished by the Arprice database in 2020, the expert for German art, Ketterer Kunst is the only strongest-selling family business represented in the global Top 10.