Autumn Auctions: Art from the 19th to the 21st Century with Seminal Work by Egon Schiele
S l e e p i n g B e a u t y 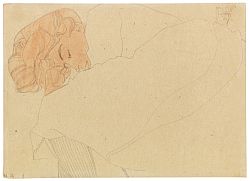 Egon Schiele
Schlafendes Mädchen
Pencil drawing with watercolors, 1908
22 x 30,2 cm
Estimate: € 150,000-250,000
Munich, 11. October 2021 (KK) - This early work by Egon Schiele remained hidden in a private collection for more than 45 years. Now the pencil drawing with watercolors will be included into the catalog raisonné of the Schiele expert Jane Kallir, and will be sold in the Ketterer Kunst Auction from December 10/11 in Munich, Germany.

"Egon Schiele's sheet "Schlafendes Mädchen" is of seminal importance, as it clearly shows the artist's development from Viennese Art Nouveau to Expressionism. Next to the delicate representation of the model, the artist also reveals his own inner sensation", explains the auctioneer Gudrun Ketterer.

Egon Schiele was only 18 years old when he rendered the sleeping girl in an extraordinary presence with just a few pencil lines and brushstrokes. Through the astounding reduction to vital details, the artist showed great poise in staging the body in all its comeliness.

He had begun to study at the Academy of Fine Arts in Vienna only two years earlier, but soon felt constrained and dropped out in 1907. He sought contact with Gustav Klimt, who became his mentor. The year "Schlafendes Mädchen" was made he also became acquainted with Oskar Kokoschka. These influences should unleash his enormous creative potential and he soon attained his signature partial color application, from which the hair-do and the delicate facial features - applied in just slightly washed watercolors - of the "Schlafendes Mädchen" also benefit.

This work is not only fascinating for its motif: The reverse side reveals another interesting aspect as it is inscribed "Besitz Hayd" (Ownership Hayd). The Austrian painter and graphic artist Karl Hayd also studied at the Academy in Vienna from 1902 to 1906. He only met Schiele after a longer stay in Prague. As they henceforth traded drawings, it is very likely that this was how the "Schlafendes Mädchen" got into the possession of the fellow painter, from where it found its way into the Nuremberg collection of Joseph Drexel. From his estate the elegant sheet became part of a Southern German private collection in 1976. It should take another 45 years before it is now in the limelight again. As part of the auction preview exhibitions, the work will be shown in five German cities as of mid November.