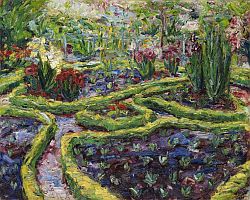 "The consignors' decision to put their trust in a German house - despite strong international competition - means both pleasure and duty to us," adds company owner Ketterer. "Our motivation to present this almost legendary masterpiece in due light could not be any higher. The fact that this big restitution case ended with an amicable agreement between all parties is a great stroke of luck for the art market".

Indeed, this inimitable flower piece, which Emil Nolde executed in glowing colors and an impasto brushstroke in 1909, is not only a prime example of the artist's early garden pictures in broad layout.

Emil Nolde's "Buchsbaumgarten" also looks back on a very turbulent history:
Ernst Gosebruch, then director of the Kunstsammlung Essen and later director of Museum Folkwang, visited Emil Nolde the year the artwork was made. Following the recommendation of Karl Ernst Osthaus, director of Museum Folkwang in Hagen, Gosebruch prepared the artist's first exhibition in Essen. For the first time he showed paintings by Nolde with religious themes, but also landscapes and flower pictures, among them "Buchsbaumgarten".

In his autobiography Nolde mentions: "I had three of my finest exhibitions at the Kunstverein Essen and at Museum Folkwang. (…) Ernst Gosebruch valued my art from very early on. (…)". In January 1911 Ernst Gosebruch acquired Nolde's "Buchsbaumgarten" and apparently sold it again in the 1920s.

In 1930 the work was part of the famous collection of the well-known Jewish lawyer and patron Dr. Ismar Littmann. Littmann was a luminary of the Wroclaw art scene and his collection was one of the most significant ones of the 20th century. After the National Socialists had seized power he was no longer able to practice his profession and got into tremendous financial straits. He commited suicide in 1934. As the National Socialist regime persecuted his widow and the four children, they were forced to sell the art collection.

In February 1935 around 200 works from the collection Littmann were sold through the Berlin auction house Max Perl, among them Nolde's "Buchsbaumgarten". Contrary to several other works from the collection, which were handed over to the Nationalgalerie in Berlin by order of the Gestapo where most of them were burnt in the furnace of the Kronprinzenpalais or shown in the exhibition "Degenerate Art", the "Buchsbaumgarten" was spared this fate.

It was acquired by Dr. Heinrich Arnhold, a Jewish banker and art collector from Dresden, for a price far below the reserve. Arnhold's widow was able to take the painting with her when she emigrated to the U.S.A. In 1956 she had the "Buchsbaumgarten" sold through the Stuttgarter Kunstkabinett of Roman Norbert Ketterer, Robert Ketterer's uncle. Gerhard Händler, then director of the Städtisches Kunstmuseum in Duisburg, today Stiftung Wilhelm Lehmbruck Museum, acquired the work for 3,600 D-Mark.

In 1999 the heirs after Dr. Ismar Littmann filed their first return request with the Lehmbruck Museum in Duisburg. In December 2019 the board of trustees of the Wilhelm Lehmbruck Museum decided to accept the request. To the foundation the restitution with the agreement on a fair and just solution in the sense of the Washington Principles is an important step towards acknowledging past injustices and drawing respective consequences.

With the auction at Ketterer Kunst in December, a new chapter will be opened for Emil Nolde's masterwork with its remarkable provenance. "I am convinced that this prominent work with its very turbulent history and all the excellent stages of its provenance has tremendous potential for the auction," explains Robert Ketterer.