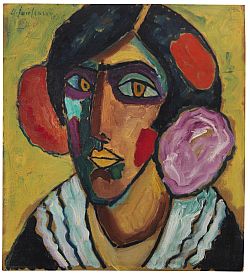 It is an art-historical sensation, because the painting was part of a German private collection for around 100 years. Only in 2017 it was presented to the Jawlensky archive and added to the supplement of the catalog raisonné which will be published in the near future.

The leading German auction house won the contract for Jawlensky's masterwork against strong global competition. "We are very pleased that after such a long time we can now present this work of the highest museum quality for the first time on the art market," says Nicola Countess Keglevich, Senior Director at Ketterer Kunst.

The German-Russian artist Alexej von Jawlensky, who was part of the environment around the artist group "Der Blaue Reiter", was one of the luminaries of Expressionism. The anniversary exhibition 'Alles! 100 Jahre Jawlensky in Wiesbaden', on display at the Museum Wiesbaden since September 2021, testifies to his outstanding relevance.

"It is a great opportunity", Keglevich continues, "to finally have a chance to win a work from the artist's most sought-after period, as comparable works are very rarely offered on the auction market."

Heads play a key role in Alexej von Jawlensky's œuvre. The portrait of man, face and countenance are among the artist's great themes.

After the turn of the century, he made first portraits of people that were close to him. However, generalizing titles such as "Spaniard", "Japanese", "Infanta" or "Egyptian Woman" indicate that the mainly female and occasionally male heads, were not intended as individualized portraits. The iconic, expressive portraits rather demonstrate Jawlensky's quest to abstract the concrete and ultimately to express his soul.

"I understood that I didn't have to paint what I saw (...) what I felt, but only what lived in me, in my soul." - Alexej von Jawlensky

At the outbreak of the First World War, his first series of heads led to the famous "Abstract Heads", the "Constructive Heads", the "Savior's Faces" and finally to his "Meditations".

"The painting 'Frauenkopf mit Blumen im Haar' is from the artist's most important work phase shortly before the First World War," says Dr. Roman Ziegelgänsberger, curator in the Department of Modern Art at Museum Wiesbaden. "Although Jawlensky worked extremely powerful and expressive during this period, he also knew how to capture even the most subtle moods. This work is characterized by a kind of restrained melancholia that lies above it like a pleasant veil and which makes for its special charm. Not least because of this, the hitherto unknown painting with the hair painted in a blazing red and the billowing mint-cool collar can be considered a great discovery."

The Provenance
Emmy "Galka" Scheyer, who managed the marketing of Jawlensky's work as of 1920, also had the "Frauenkopf mit Blumen im Haar" on consignment, as a label on the reverse suggests. She placed the portrait with the Hamburg gallery Commeter, presumably for the major traveling exhibition in 1920/21. In addition to the gallery label on the original artist's frame, we also find information about another station of this work, the Galerie Arnold in Dresden.

The first known private owners were an architect of New Objectivity and his wife. He most likely saw works by Alexej von Jawlensky as early as in the exhibition at Barmer Ruhmeshalle in 1911, when he was active in Elberfeld.

The painting came into the collection of the current owner through donation: "I have grown very fond of this work as it layed the ground for my activities as a collector 45 years ago ," says the consignor from the Frankfurt region. "The decision to sell it was not an easy one, however, entrusting it to Ketterer Kunst was. To me choosing this auction house was a logical consequence for the sale of such an important work."

In fact, it was only this year that Ketterer Kunst achieved the world record for a "Mystical Head" by Alexej von Jawlensky with proceeds of € 1,125,000.

"Jawlensky's distinctive "Frauenkopf mit Blumen im Haar" which had previously been unknown to research, has an enormous potential. The work will not only enrich our auction and its new destination, but also promote Germany as an important international art marketplace", says Robert Ketterer, auctioneer and owner of Ketterer Kunst.