Summer Auctions: From The Deutsche Bank Collection – Part 2
Let's do it again! 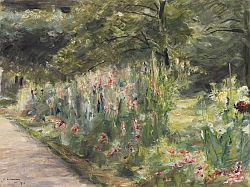 Max Liebermann
Der Nutzgarten in Wannsee nach Südosten
Oil on canvas, 1923, 55 x 76 cm
€ 300.000-400.000
Munich, April 14, 2021 (KK) - They had already made for enormous demand and a great auction in December 2020: Select artworks from the Deutsche Bank Collection. Now a second batch of works from this top-quality collection is eagerly awaited. 25 works by renowned artists such as Max Liebermann, Ernst Wilhelm Nay, Günther Uecker and Lesser Ury will be called up in the Ketterer Kunst Auction on June 17-19 .

"I am very delighted that we are able to build on the high level achieved in the first auction. Top quality and a first-class provenance will be met with quite some demand by a market still starved by the pandemic", says auctioneer and company owner Robert Ketterer. "Attractive estimates will speak to those who didn't get their share last time."

Friedhelm Hütte, head of the art activities in the Department of Art, Culture and Sports at Deutsche Bank says: "The amount of top prices and world records realized in the first sale clearly exceeded our expectations, but it also impressively underlined both the quality of the Deutsche Bank Collection and the expertise of Ketterer Kunst."

The auction is led by Max Liebermann's oil painting "Der Nutzgarten in Wannsee nach Südosten" with an estimate of € 300,000-400,000. This homage to nature is a wonderful document of both the artist's virtuous craftsmanship as well as his fascination for the wild splendor and lush abundance of nature. Made in 1923, this work is an outstanding example of his so-called garden pictures, a genre in which Liebermann reached his apex and eventually became an artist of Modernism at an old age.

Both Günther Uecker's sculpture "Kunstpranger" dated 1983 and Ernst Wilhelm Nay's "Doppelspindel-Rot" will enter the race with estimates of € 200,000-300,000 each. While the first decries the destruction of the environment through man, the latter is a great example of how both color and form attained new expressive power in Nay's late creative period. Made in 1967, the oil painting is one of the artist's last works. Characterized by great calm and order, it has been shown at renowned museums like the 'Schirn Kunsthalle' in Frankfurt and the 'Museum des 20. Jahrhunderts' in Vienna.

In 1928 Lesser Ury staged the "Brandenburger Tor vom Pariser Platz aus gesehen" in masterly impressionist pastel technique. In this pictorial orchestration of the excessive Roaring Twenties, the German capital's striking symbol moves center stage more than in any other work. The light-flooded work, one of the greatest coloristic accomplishments in Ury's late period of creation, is estimated at € 140,000-180,000.