Ketterer Kunst with Stardust For A Good Cause
Caritas Charity Auction 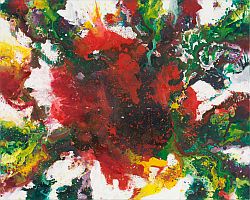 Bernd Zimmer
Das geheime Leben der Sterne 35
Acrylic on canvas, 2018
120 x 150 cm
Estimate: € 10.000-15.000
Munich, May 19, 2021 (KK) - It can happen suddenly and it can happen to anyone: Life is normal the one moment, the next moment you have an accident, get ill and in need of care. What a good thing it is to have someone who takes care of you, and even better if that someone has support. The "Department for Family Member Carers" of Caritas is doing a tremendous job in this field. But that would not be possible without donations. For this good cause Ketterer Kunst is going to sell a small but select range of works in context of its Auctions from June 17 to 19 in Munich, Germany.

"I am very pleased to have the opportunity to support Caritas and the great work they do with this project. My thanks primarily go to the artists, as it is their commitment that makes this benefit auction possible", says Robert Ketterer. The auctioneer and company owner continues: "In times that have raised our awareness of the significance of good care, it is particularly important to support those who we don't see doing mostly voluntary work in domestic settings."

The title of Bernd Zimmer's contribution to the auction could hardly be more appropriate. With his work "Das geheime Leben der Sterne" (The Secret Life of the Stars) dated 2018, the Bavarian artist distributes more than just a little stardust, as the proceeds of the work estimated at € 10,000-15,000 will help to shine a lot of light onto the lives of caring relatives guided by the Caritas department. In 2015, Bernd Zimmer was represented as one of the "Junge Wilde" in the grand overview exhibition "Die 80er" at Städel Museum in Frankfurt am Main. Further works by the artist are at, among others, the Kunsthalle Bremen, the Pinakothek der Moderne in Munich and the Busch-Reisinger Museum / Harvard Art Museum in Cambridge (MA) in the USA.

Magdalena Jatelová's large-size work "Essential is no more visible", created with the help of pyrotechnics, will also be called up with an estimate of € 10,000-15,000. In 2015, the documenta artist created a moment in which time seems to stand still by capturing smoke in its visual form.

Elvira Bach, who is represented in this auction with "Freiwillig allein (Auf unser schönes Leben)" (Voluntarily alone/ To our beautiful life, estimate: € 8,000-10,000), is well-known for figure pictures in most of which she celebrates self-confident and emancipated women in strong colors. Her portraits of women gained international fame as early as in the 1980s. Her works are part of important collections, including the Museum of Modern Art in New York and the Deutsche Bank Collection in the Städtische Galerie in Wolfsburg.

The auction is further enriched by among othters the extra catalog From An English Collection, select works by the Deutsche Bank Collection and a suite of works by Joseph Beuys (see separate press releases).