Ilse & Hermann Bode and the Pelikan Collection
Let's do it again! 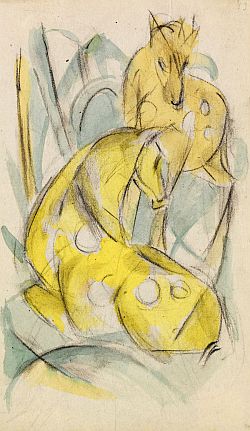 Franz Marc
Zwei gelbe Tiere (Zwei gelbe Rehe)
Watercolor, 1912/13
17 x 10 cm
Estimate: € 200,000-300,000
Munich, May 25, 2021 (KK) - The Hannover dentist and art collector Hermann Bode was a cosmopolitan. The house of the Bodes was a meeting place for the most important artists and creative heads of the modern age, and their guest book with illustrious names is an artwork of its own. Now five select works by Feininger, Gleichmann, Klee, Marc and Mueller from the Collection Ilse and Hermann Bode will be called up in the Ketterer Kunst Auction from June 17-19.

Robert Ketterer, auctioneer and owner of Ketterer Kunst, expresses his enthusiasm: "Quality and provenance are equally perfect. "He is convinced: "The international art market is going to appreciate this great discovery."

Hermann Bode (1882-1973) was married in second marriage to Ilse Robert, neé Beindorff, daughter of Fritz and Elisabeth Beindorff. Elisabeth Beindorff, neé Wagner, was the daughter of Günther Wagner, founder of the writing utensil manufacturer Pelikan. Ilse and her husband Herrmann Bode shared a passion for art, which she had inherited from her father and grandfather, who had compiled the trendsetting Pelikan art collection.

The Pelikan Art Collection has always been much acclaimed, it comprises works from six centuries of art history and largely owes its exceptional quality to Günther Wagner and Fritz Beindorff, the former owners of the paint and ink manufacturing company. As part of their commitment for the 'Hannoversche Kunstverein' and the 'Kestner Gessellschaft', they a cquired high-quality artworks in their exhibitions, among them works by Lovis Corinth, Max Slevogt, August Macke and even a complete collection of works by Adolf Hölzl.

In 1911 they offered a prize for artists working with their company products. On the jury were museum directors like Gustav Pauli and Hugo von Tschudi, as well as artists such as Max Liebermann and Hugo von Habermann. El Lissitzky conceived a Pelikan campaign that went down in art history, a horizontal ink bottle by Wilhelm Wagenfeld became a design classic and Kurt Schwitters used misprints of company ads for his famous collages.

Between April and June 1963 the Kunstverein Hannover showed the exhibition "Pelikan-Kunstsammlung aus dem Besitz des Hauses Günther Wagner, Hannover, Pelikan-Werke, und der Familie Beindorff". While the Old Masters were represented by names like Rembrandt, Rubens, Cranach and Riemenschneider, the section of then contemporary art comprised works by, among others, Ernst Wilhelm Nay and Alexander Camaro. Next to the company collection, loans came from, among others, members of the Beindorff family and also from Dr. Hermann Bode.

The suite of works offered in the Ketterer Kunst Auction is led by Franz Marc's small-sized watercolor "Zwei gelbe Tiere (Zwei gelbe Rehe)" from the important time of the "Blauer Reiter" in 1912/13. Acquired from the artist's ownership, it has been part of the Collection Ilse and Hermann Bode until today. The poetic sheet in a very rare, nearly original condition will be called up with an estimate of € 200,000-300,000.

Paul Klee's "Grundverhexte Landschaft" from 1924 is going to enter the race with an estimate of € 100,000-150,000. The work with a motif singular in the artist's œuvre was also been acquired directly from the artist. In Klee's characteristic pictorial language and a clear expressiveness, it shows a surreal composition made during the ingenious Swiss artist's important time at the Bauhaus.

Lyonel Feininger's sheet "An der steilen Küste", estimated at € 40,000-60,000, delivers wonderful proof of his subtle sense of humor. The detailed watercolor with India ink drawing was made in 1921, Feininger's important first year at the State Bauhaus in Weimar, and is a document of the artist's fascination for the technology of his time.

Around 1925 Otto Mueller made "Sitzender weiblicher Akt" in chalks and a subtle palette, owing to the clear frame drawing it appears almost like a painting. A well-proportioned and perfectly staged body testifies to the importance the artist attached to the female figure, as it offered him beauty and Eros in idealized and reduced form. The estimate for the work that has not been exhibited for more than 50 years is at € 30,000-40,000.

The only oil painting in this exquisite array is Otto Gleichmann's "Frauenbildnis" dated 1926. With her both romantic tender and expressive traits, the work estimated at 20,000-30,000 is reminiscent of portraits by Marie Laurencin.