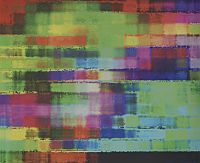 Prof. Dr. Wolfgang M. Heckl,
Phantom of the Opera
Alu-Dibond, 2021
120 x 100 cm
Estimate: € 8.000-12.000
Munich, May 11, 2021 (KK) - It is going to be a world premiere when Prof. Dr. Wolfgang M. Heckl's AI-artwork "Phantom of the Opera" will be called up in the Ketterer Kunst Auction in Munich on June 17-19. The physicist created the colorful painting with a neuronal artificial intelligence (AI) which interpreted the first chords of Andrew Lloyd Webber's famous musical.

"With its bright and harmonious colors Wolfgang Heckl's work is reminiscent of Paul Klee's expressionist art", says Robert Ketterer, auctioneer and owner of Ketterer Kunst. "We notice only at second sight that Heckl pursued an entirely new path of creative expression with artificial intelligence. It is an honor for Ketterer Kunst to be the first house to offer such a technological and artistic innovation on the market. I expect that this invention will arouse great interest."

Heckl's artwork is not just a random result, but a veritable transformation, of which the reversal of the process delivers proof. When reentering the image into the AI, the sounds of the musical remain (largely) original.

The artist conceived the idea upon a visit to the Lenbachhaus in Munich where he saw "Impression III (concert)" - a work by Wassily Kandinsky made as the essence of a concert of his friend Arnold Schönberg in early 1911. Kandinsky was fascinated by the twelve-tone music he had heard along with Franz Marc and other members of the "Neue Künstlervereinigung". Under the impression of the performance he created "Impression III (concert)", which would later become one of his most highly acknowledged works. For Kandinsky the concert was not just a musical experience, but an experience that also led to other sensations, first and foremost optical impressions. A little later he delivers comprehensive account of the correlation between colors, instruments and sounds in his book "About the Spiritual in Art".

With the first chords of "Phantom of the Opera" Heckl did the following: A neuronal network was trained to encode visual information on the basis of tens of thousands of images and to reconstruct the original image in a performance test after decryption. In a second step this method was applied to tens of thousands of pieces of music (midi-files). Then the notes were assigned to colors and finally a neuronal interconnection network was created between sound and picture.

"We also ran performance tests", the computer artist explains, "by having the AI transform the same piece of music into a painting several times. The results were extremely similar, but not fully identical."

Science, however, has not solved all the riddles yet. "Whether the AI can actually generate additional value irrespective of the analog working human artist remains to be clarified," says Heckl. "We have already become used to AI in fields like pattern recognition, human speech intelligibility or in form of algorithms making suggestions on sales platforms. In the field of art a lot of questions are still unanswered. But the idea that the AI can be an artist is out in the world."

Wolfgang M. Heckl (www.wolfgang-heckl.de) has been a member of the Parsberg Art Gild for many years. He holds a teaching post in physics in Munich. In his publications he takes a close look at the nanocosmos, which resulted from his extensive research in the field of nanomicroscopy. Under the keyword Science & Art he has an entry in The Guinness Book of Records for transforming the world‘s smallest hole into an artwork. He started the project of transforming images into music and vice versa with the help of algorithms some 15 years ago. Now he takes it to a new level and is the first AI artist to employ neuronal networks for this task.