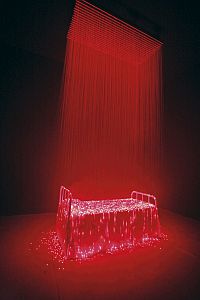 Li Hui
Reincarnation
Installation, 2007
Ca. 1000 x 450 x 200 cm
Height variable from 4 to 10 meters
Estimate: € 70.000-90.000
Munich, May 3, 2021 (KK) - What is it that a fog machine, glass fiber fabric and golden shit sculptures have in common? All these odd components are parts of artworks by Li Hui, Jagannath Panda, and Terence Koh, three of nearly 40 artists from 15 countries whose works are part of an important English Collection of which around 60 objects will be called up in the Ketterer Kunst Auctions in Munich on June 17-19.

"This acclaimed collection is a prime example of an extremely successful fusion of positions in contemporary art from different cultural back-grounds" says Robert Ketterer, auctioneer and owner of Ketterer Kunst. "This is a one-off collection on the German auction market. It will particularly captivate art lovers who have a sense for the extraordinary."

Whether from the North, South, East or West - this collection covers the entire globe: It features works by artists from Denmark and the UK, Greece and Argentina, as well as from the USA, India, Japan or Iran. The range of objects, among them a number of large spatial installations, is particularly attractive for the usage of fascinating materials and interesting concepts.

The international selection is led by the monumental installation "Reincarnation" from the Beijing artist Li Hui. With a fog machine, laser light and various types of hangers he breathes life into a bedframe, makes it glow, and - most importantly - stirs emotions. The estimate for the work with a variable height from 4 to 10 meters is at € 70,000-90,000.

Found objects, so-called objets trouvés, are at the core of the creations of Subodh Gupta from New-Delhi. For his fascinating works, among them the two-part work "There Is Always Cinema (IV)", he makes exact copies of the original objects or, as it is the case with the oil and enamel object from 2007, shows fragments in close up view. Both works will be called up with estimates of € 60,000-80,000.

Subodh Gupta
Untitled
Oil and enamel on canvas, 2007
167 x 228 cm
Estimate: € 60.000-80.000
Next to the abstract acrylic work from the Swiss artist John Michael Armleder, the likewise large-size portrait "Johnny 3 D", embroidered on canvas by the Iranian Farhad Moshiri, and the "Portrait of Hariri" from the Chinese artist Yang Shaobin, will enter the bidding race with estimates of € 30,000-40,000.

The auction is completed by a suite of works by Joseph Beuys as well as by an extra catalog of gems from the Deutsche Bank Collection (see separate press releases).