Summer Auction At Ketterer Kunst With A Fair And Just Solution For Works By Thoma And Singer
DISCOVERED! 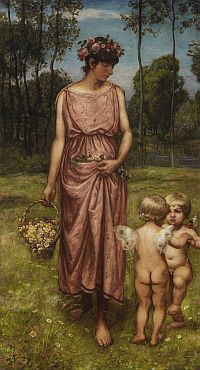 Hans Thoma
Flora
Oil on paper, 1882, 113 x 62 cm
€ 25.000-35.000
Munich, April 12, 2021 (KK) - Two works by Ilona Singer and Hans Thoma have both notable provenances and a fascinating history in common. On top they also represent best practice when it comes to finding solutions for works of looted art. Now these two rediscoveries will be sold in the Summer Auction at Ketterer Kunst in Munich on June 17-19 .

"Unfortunately, large scale rehabilitation of loss of Jewish property attributed to prosecution still is no matter of course. And this is where I see the art trade bearing responsibility. We must not leave owners of such difficult works alone with their problems", says company owner Robert Ketterer. "We have to deploy all our competence to find solutions. Which is why I am all the happier that we were able to identify the true heirs and that we could help to mediate between them and the consignors. This way we made these two artworks marketable again in the sense of a fair and juts solution."

Indeed, there have been several cases in the past where the market showed appreciation for such efforts. Only last year a work by Karl Hagemeister was so up-valued through the intensive research that it eventually realized a new world record price.

Hans Thoma's work "Flora" - an homage to the artist's wife, the flower painter Bonicella "Cella" Thoma - will likely make for similar excitement in the saleroom. The 1882 oil painting is not just an important personal motif for Thoma of which he made many variations, it also meant a lot to many other people, as an extraordinary provenance shows. Henry Thode, director of the 'Städelsche Kunstinstitut' Frankfurt (1889-1891) and patron of both Hans Thoma and Arnold Böcklin, is among its previous owners. The painting's turbulent history began when it found a home with the leather goods wholesaler and art collector Hermann Weiß from Landau, with whom it could spent just a few peaceful years before the Jew Weiß tremendously suffered under ever increasing repressions in the NS era. His apartment was looted and entirely destroyed during the November Pogroms of 1938. Before he was able to flee to Tel Aviv in 1939, Weiß had tried to sell "Flora" in 1937. Eventually the impressive artwork found its way, presumably through private channels, into a collection in Mannheim. For some time it was kept safe from air raids in the cellar at Heidelberg Castle and eventually made it through the war unharmed. Today this tender and lovely work with a both moved and moving history can be offered on basis of a fair and just solution and in amicable agreement with the heirs of Hermann Weiß for an estimate of € 25,000-35,000.

Ilona Singer's oil painting "Kind mit Teddybär" also led an existence in oblivion ever since it had been confiscated from the collection of her sister Margita Hahn by the Trusteeship Prague in 1943/44 and was turned over to the Jewish Museum from where it disappeared in the late 1960s. After thorough research and an amicable agreement with the heirs of Margita Hahn, one of the few known paintings by Ilona Singer is now free from restitution claims and can be put up for sale at auction. The estimate for this work with a particularly strong clarity of expression is at € 6,000-8,000.