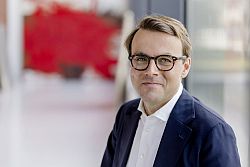 "Senior staff with a longtime experience in international client services is highliy sought-after on the market, which is why I am all the more delighted that Dr. Sebastian Neußer chose to join us", says auctioneer and company owner Robert Ketterer. His auction house has been Germany's No. 1 for sales of the 19th-21st Century Art for several years. "Strong global competition requires continuous redevelopment - especially when it comes to profound client counseling," explains Robert Ketterer.

As a trained banker with a great love for art and a PhD in art history, Dr. Sebastian Neußer is the perfect consultant for the knowledgeable clientele of Ketterer Kunst. Following stays in the USA and the UK, he became director at Michael Werner, one of Germany's leading galleries. For almost ten years he applied his experience in organizing exhibitions and supporting artists, and also became a successful art broker.

Starting May 1, Dr. Sebastian Neußer, who will now be in charge of high-end client service with a focus on the expansion on the international market, will join the executive team of Ketterer Kunst, which, next to the company owner Robert Ketterer, also comprises the auctioneer Gudrun Ketterer, managing director Peter Wehrle and the scientific advisor Dr. Mario von Lüttichau.