Ketterer Kunst Auction 484 in Munich - 19th Century Art
Bavarian Fishes for Mermaids
Munich, May 24, 2019, (kk) - The auction season celebrating the 65th anniversary of Ketterer Kunst in Munich kicked off with a very successful auction of 19th Century Art that grossed a total of more than € 1.3 million  and that is with just 95 objects on offer. New records and sharp increases made for a great atmosphere in the saleroom. 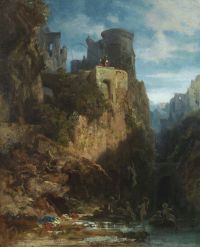 "It was a very successful auction, indeed", says Robert Ketterer, auctioneer and owner of Ketterer Kunst. "The excellent sales quota of almost 80% by lots and an average increase of 107% per sold object are just as impressive as more than 30% new buyers. Another remarkable fact is that the small range of just 95 works on offer included 34 works, more than a third, that yielded results above the € 10,000 mark".

The auction commenced with seven works by Carl Spitzweg, which, owing to the great demand, were not only all sold but also saw excellent increases. The top lot in this array, and eventually also the entire auction's number one, was "Nixenfang" (lot 4), which was called up at € 36,000. The museum quality motif was rediscovered after 100 years, and did not only convince art lovers from the artist's home region, even though it was a Bavarian who in the end awarded the masterpiece with € 137,500* over the phone, thus providing a four-fold of the calling price.

With € 42,500* a bidder present in the saleroom offered more than twice the calling price for Carl Spitzweg's "Talschlucht mit Sennerin" (lot 7), relegating two ambitious commissions from Bavaria and Baden-Württemberg to places second and beyond.

More than half a dozen works by Alexander Koester, led by a very strong composition of ducks on Lake Constance, were likewise successful. A generous written bid from Bavaria let the work "Enten, Reichenau" (lot 69) soar to two and a half times its calling price. At € 100,000* both the saleroom as well as phone bidders from Southern Germany and North Rhine-Westphalia had to admit defeat.

Bidders from around the world felt attracted by Peder Mørk Mønsted's photo-realistic painting "Wintersonne im Engadin" (lot 79), which is why it was little surprising that the idyllic masterpiece climbed from a starting price of € 36,000 to a result of € 92,500* in no time, providing a new German Record. Despite tough competition from Austria, Sweden, Denmark and Canada, the magnificent snowy landscape will remain in Germany.

With Josef von Brandt's "Standartenreiter auf dem Schlachtfeld" (lot 41) an impressive motif from Polish history was called up. As expected, strong interest came from Poland, however, eventually a collector from Canada stood his grounds with a bid over three and a half times the calling price. The respectable amount of € 87,500* also left German competitors empty handed.

A new record was realized by Edward Theodore Compton's "Lyskamm (Monte-Rosa)" (lot 64). With a result of € 68,750* a bidder from Great Britain offered four times the calling price of € 17,000 and set a new top mark for a work by the artist on the German market. The saleroom, international commissions and phone bidders from Germany, Austria, Italy and Switzerland were left with nothing. Another work by Compton, his "Finsteraarhorn vom Rhônegletscher" (lot 66) will remain in Southern Germany for € 22,500*, that is two and a half times the calling price.

A private collector from Northern Germany provided a new World Record by standing his grounds against fierce competition from all over Germany, as well as from Belgium, France and Great Britain in the race for a fascinating bronze by Sascha Schneider. For a result of € 60,000* he may now call the "Jünglingsbüste mit ägyptischer Kopfbedeckung" (lot 59) his own.

It took a collector from Brandenburg the amount of € 46,250* to take Karl Hagemeister's "Kemnitzer Heide" (lot 60) home with him. Called up at € 23,000, mainly art lovers from the Berlin area competed for the painting from the artist's important stylistic development phase as a result of which he attained an impressionist concept of nature. The same buyer also won the battle for Hagemeister's second work "Wendische Bäuerin" (Los 39), which he lifted from € 9,000 to € 16,250*.

More great results were realized by, among others, the following: