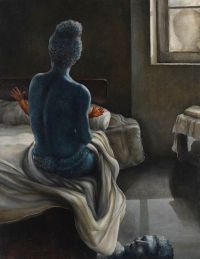 Bikash Bhattacharjee
She and the Morning
Oil on canvas, 1974
137 x 106 cm
€ 40.000-60.000
Munich, November 12, 2019 (KK) - India celebrates him as one of the most important artists of the 20th century. For the first time two works by Bikash Bhattacharjee will now be sold in Germany. They will be called up at Ketterer Kunst, Germany's number one auction house, on December 6 and 7.

The oil painting from 1974 "She and the Morning", shown at the Third Triennial India as early as in 1975, is an impressive example of the technical mastery and pictorial complexity in Bikash Bhattacharjee's œuvre.

With the painting "Doll in the Lane" from 1971 Ketterer Kunst offers a remarkably characteristic work from the artist's significant "Doll Series". Both works will enter the bidding race with an estimate of € 40,000-60,000. Please find detailed information online on
+ She and the Morning
and + Doll in the Lane


The family company Ketterer Kunst (www.kettererkunst.com and www.ketterer-internet-auctions.com), with headquarters in Munich and branches in Hamburg, Duesseldorf, Berlin and the USA, was founded in 1954. It is one of the leading European houses for auctions of Fine Art from the 19th to the 21st Century and Rare Books. The latest art market review for Fine Art 2018, compiled by artprice.com, ranks Ketterer Kunst on place 11 in the global TOP 100. The auctioneer's clientele predominantly consists of international collectors, art dealers, curators and museums.