Anniversary Auction in Munich - 19th Century Art
On the Peak 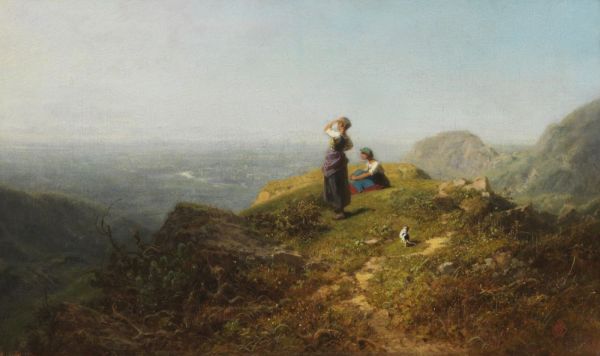 Carl Spitzweg's extraordinary characters are world-famous. They illustrate his pictorial narrations of fateful situations in the lives of common people, depict emotional states at both odd and tragic moments or capture, as it is the case in this work offered here, timeless views of romantic landscapes. The two girls on the mountain peak and the cat as their faithful companion admire the spectacular view and witness a magical moment estimated at € 50,000-70,000.

Intensive landscape studies are also at the core of the artistic endeavors of Wilhelm Kuhnert who earned his international acclaim through his animal motifs. He is the first animal painter to abandon working in the studio in order to gather impressions in nature, among others in Egypt, East Africa and India. Lions in the steppe are not only his favorite motif, they also became his trademark. The oil painting "Löwen am Urwaldbach" is a remarkable example of his mastery. The majestic view with an estimate of € 80,000-120,000 leads the range of offers in this auction.

An estimate price of € 60,000-80,000 has been tagged to Max Liebermann's oil study in impressionist duct from 1887, an important preliminary work for the monumental painting "Die Netzflickerinnen", today in possession of the 'Kunsthalle' in Hamburg. Additionally, the work "Schreitender Bauer", a rediscovery of a work believed to have gone lost decades ago, is a likewise remarkable accomplishment by Liebermann. Made in 1894 and formerly part of the renowned collection of Max Böhm in Berlin, it is a fully executed oil study for the destroyed monumental painting of the same name that used to be in possession of the Museum Königsberg. It is going to enter the race with an estimate of € 50,000-70,000.

Edward Theodore Compton's impressive painting "Über dem Nebelmeer (Monte Rosa vom Rimpfischhorn)" was on display at the important annual exhibition at the Königliche Glaspalast in Munich in 1914. With great mastery the artist captures the first shafts of sunlight at the break of dawn and bathes the mountain massif in a light so special that the observer virtually feels the freezing cold wind at the mountain peak. Lucky those who can indulge in the winter painting that has been estimated at € 30,000-50,000 from the comfort of their cozy living room. The same can be said about the other two of his works in the auction: The painting "Morgen auf Bergeshöhe" (estimate: € 15,000-20,000) and the watercolor "Pragser Wildsee" (estimate: 4,000-6,000).

Apart from two bronzes and a plaster relief, Franz von Stuck will captivate art lovers with the painting "Meine Tochter Mary im Velázquez-Kostüm". It was made at the height of his career when he was showered with honors. He proudly presents his almost grown-up and only biological daughter in a depiction that comes in the original octagonal frame and with an estimate of € 30,000-40,000.

Ludwig von Hofmann's oil painting "Die Zauberinsel", estimated at € 25,000-35,000, was made as early as around 1915/1920, however, it addresses a theme that could hardly be more topical: It expresses the artist's key issue, the coexistence of man and nature in such a fabulous way that Hofmann's quests for harmony and the ideal of unity become virtually tangible.

Apart from three works by Alexander Koester (with estimates of up to € 35,000) and just as many oil paintings by Eduard von Grützner, among them a "Vorstadtkneipe" from 1898 estimated at € 20,000-30,000, the wide array of offerings is completed by masterpieces from, among others, Josef von Brandt, Otto Dill, Eduard Grützner, Karl Hagemeister, Carl Ludwig Jessen, Wilhelm von Kobell, Franz von Lenbach, Otto Modersohn, Edvard Munch, Otto Pippel, and Alfred von Wierusz-Kowalski.

Auction:       19th Century Art in Munich on November 22, 2019
The family company Ketterer Kunst (www.kettererkunst.com and www.ketterer-internet-auctions.com), with headquarters in Munich and branches in Hamburg, Duesseldorf, Berlin and the USA, was founded in 1954. It is one of the leading European houses for auctions of Fine Art from the 19th to the 21st Century and Rare Books. The latest art market review for Fine Art 2018, compiled by artprice.com, ranks Ketterer Kunst on place 11 in the global TOP 100. The auctioneer's clientele predominantly consists of international collectors, art dealers, curators and museums.