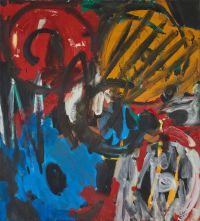 Ernst Willhelm Nay
Mit gotischem Rot, 1963
Oil on canvas. 110 x 100 cm
€ 250,000-350,000
Munich, May 06, 2019 (KK) - Ernst Wilhelm Nay's high-class oil painting "Mit gotischem Rot" is both timeless and at the same time highly topical. It is one of the first works from the renowned group of the "Augenbilder" and will be called up as one of the top lots in the Evening Sale as part of the 65th Anniversary Auction at Ketterer Kunst in Munich on June 7.

Ernst Wilhelm Nay's "Mit gotischem Rot" was shown at important solo exhibitions from an early point on. Already in 1963 it made it into the acclaimed Galerie Günter Franke in Munich, just a year later it was at Michael Knoedler in Paris and New York.

It was during the 1960ies that the artist's pictorial expressiveness took a new and fascinating turn. The famous superimposed discs with lines and grids led to associations with the human eye, and thus the work group of the so-called "Augenbilder" (Eye Pictures) was born.

At its first exhibitions "Mit gotischem Rot" was still titled "Vierung" (Crossing), a term that describes the intersection of transept and central nave in church architecture. Other early paintings from this work period are called "Vierfalt in Rot", "Vierfalt - Blau" and "Vierklang". The interplay of four forms and colors was varied in those four paintings from 1963, however "Mit gotischem Rot" is the first work in which the superimposed black and white lines lead to the visual effect characteristic of the "Augenbilder". Despite the strong colors, the four disc-shaped color fields with the slightly suggested eye filling rather remain in the background, as they are dominated by a rhythm in black and white. An eye rendered in strong brushstrokes hovers at the pictures's center, or at the crossing.

In the following year 1964 Ernst Wilhelm Nay mounted huge Eye Pictures below the ceiling at Documenta III, thus expressing the important architectural-spatial aspects of his concept. The eyes, as mirrors of the soul also raise associations with archetypal symbols, now look down from above and even increase their effect on the observer.

"Mit gotischem Rot" is a fascinating work and a real rarity on the auction market. With its virtuoso execution it is a wonderful document of dynamics and modernity, that will not only arouse the interest of established collectors but also appeal to a younger audience.