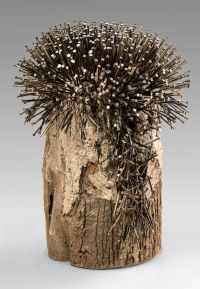 Günther Uecker - Baum
Nails, paint and ashes-glue compound on trree trunk, 1988
Height: 111cm / 43.7 inches Diameter
€ 400,000-600,000
Munich, April 30, 2019 (KK) - Wassily Kandinsky, Franz Marc, Gerhard Richter, Cy Twombly and Andy Warhol, to mention but a few of the top-class artists represented with their masterpieces in the Anniversary Auction of Ketterer Kunst. They will be called up in Munich on June 7 and 8 with estimates in six- and seven-figure regions.

Next to Wassily Kandinsky's spectacular oil painting "Treppe zum Schloss (Murnau)", which leads the range of offers with an estimate of € 1,500,000-2,500,000 (see separate press release), the auction includes scores of highlights from German artists.

Günther Uecker contributes around a dozen works, among them five with six-digit estimates. Next to "Hommage à Adalbert Stifter - 'Feld der Erwartung'"and "Hilfe für Vietnam", his "Baum" is a striking document of the artist's wake-up call against the destruction of nature through the hand of man.

Apart from several works by Gerhard Richter, led by the work "Portrait Karl-Heinz Hering" (estimate: € 300,000-400,000) from 1968, his namesake Daniel Richter deservedly demands attention with "Alles ohne Nichts" (estimate: € 250,000-350,000), one of his main works from the important year 2007, the year that Gerhard Richter's window for the Cologne Cathedral was unveiled. In his Dance of Death-themed picture Daniel Richter references the window's color plates. Following the painting "Farbenlehre" from 2005, it is his second allusion to the famous fellow painter.

German Expressionism at its best is represented by Ernst Ludwig Kirchner and Franz Marc, whose works are estimated at € 300,000-400,000 each: The oil painting "Drehende Tänzerin" from 1931/32 by the former is a remarkable document of the important role dance played in the œuvre of the "Brücke" artist. The paper work "Zwei Pferde" from 1910-11 by the latter is part of the series of the "Weidenden Pferde" (Grazing Horses), which has its origin in the founding period of the "Blaue Reiter". It is also the only known preliminary work for the painting "Streitende Pferde". The reverse side of the unusually large sheet is adorned with "Zwei stehende Mädchenakte mit grünem Stein".

While "6 Hasensteine" by Joseph Beuys will be offered with the same estimate of € 300,000-400,000, Ernst Wilhelm Nay's timeless yet highly topical work "Mit gotischem Rot" from 1963 is at € 250,000-350,000 (see separate press release). His "Lob des Grau" was made eleven years earlier and will enter the bidding race with a price of € 200,000-300,000. It counts among the first works from the period of the "Rhythmische Bilder" (Rhythmic Pictures) and marks a highlight in the artist's creation between the Hekate era and the Disc Pictures.

Several works from the early 20th century, among them "Abstrakter Kopf (Poesie des Morgens)", "Teller mit Äpfeln (Äpfelstillleben)" and "Variation: Duft und Frische (Holland)" (with estimate prices of up to € 300,000), come from Alexej von Jawlensky, while Otto Dix delivers proof of his mastery with, among others, the two works "Alte Birnbäume in Hemmenhofen" (estimate: € 180,000-240,000) and "Golf" (estimate: € 150,000-250,000). These two very different works fascinate the observer with their very individual charm.

A price of € 180,000-220,000 has been tagged to John Chamberlain's metal object "OKTETT2SHARPS". In this unique object with a musical connotation the artist, one of the most acclaimed representatives of Abstract Expressionism, transforms industrial steel sheet into flowery airiness.