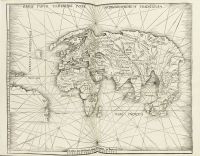 Claudius Ptolemaeus
Geographie opus novissima traductione, 1513
Estimate price: € 140.000
Hamburg, April 15, 2019 (kk) - It probably is the most important edition of the "Geographia" by Claudius Ptolemaeus that will be called up at Ketterer Kunst in Hamburg in the Rare Books Auction on May 27, as this is the first atlas ever to include a map of America.

The auction's top lot "Geographie opus novissima traductione" by Claudius Ptolemaeus from 1513 will be called up with an estimate of € 140,000. The complete copy with the fine woodcut maps in strong and broad-margined prints also includes 19 more recent maps by Martin Waldseemüller, and is the first real "modern" atlas.

FANTASTISC: An acclaimed Northern German private collection used to be the home of more than two dozens books and portfolios with illustrations by Marc Chagall. While Homer's "LOdyssée" from 1975 will be offered for € 35,000, the prices for both "Cirque" (estimate: € 120,000) with its 38 gaudy sheets, as well as for the sensual and joyous celebration of colors in "Daphnis & Chloé" (estimate: € 130,000) will reach six-figure sums.

FLOWERY: The array of a number of works from natural history is led by the eight volume strong masterpiece "Les liliacées" by Pierre-Joseph Redouté. The estimate for the splendid plant book by the Flemish "Flower Raphael", a sobriquet he had earned for his great talent, is at € 120,000. The well-preserved copy from the renowned collection of Otto Schäfer was made at the peak of Redouté's creation. The former French secretary of the interior Jean-Antoine Chaptal made eighty copies from the edition of just 280 copies sure for himself, and Napoleon also had reservations for a large number of copies.

MANIFOLD: Marcus Elieser Bloch's "Oeconomische Naturgeschichte der Fische Deutschlands" and "Naturgeschichte der ausländischen Fische" is the main ichthyological work of the 18th century. A very rare complete copy with more than 400 copper plates in old coloring and partly white- or silver-heightened will be called up. Up into the 19th century the first edition of this monumental publication remained one of the most important reference works. The estimate is at € 50,000.

GAUDY: € 30,000 each have been tagged to two luxuriously illustrated books on birds. The five volume strong work by Cornelius Nozeman about "Nederlandsche vogelen" was made between 1770 and 1829. The first edition of this comprehensive monograph of Dutch birds is the most acknowledged Dutch work of its kind. The complete copy with 250 unbound and broad-margined copper plates in a neatly executed contemporary coloring is of utmost scarcity. The famous natural history of birds by Georges Louis Leclerc Buffon also has several fine depictions of butterflies that add on to the almost 1000 plates with birds in strong coloring in his unbound edition "Histoire naturelle des oiseaux" published in Paris between 1765-83.

POWERFUL: Karl Schmidt-Rottluff's "Series of 9 woodcuts" from 1918 is not just a wonderful portfolio with work from the acclaimed "Brücke" member, at the same time it is a very rare complete set of the original woodcuts which are among the absolute highlights in the oeuvre of prints by the important expressionist. The estimate is at € 30,000.

REVOLUTIONARY: Only very few books had so much immediate impact on the course of world affairs as it is the case with "Das Kapital" by Karl Marx. The so-called bible of scientific Socialism will be called up in the first edition of the first volume (estimate: € 30,000). It is the only volume released during Karl Marx' lifetime. After his death Friedrich Engels compiled two more volumes from manuscripts Marx had left behind.

GOTHIC: The Breviarium Romanum from the print shop of Nicolas Jenson has been estimated at € 15,000 and is one of just a very few of his prints in Gothic type. At the same time this very rare Editio princeps is an absolute deluxe print in red and black on parchment. Drawn-in initials in sheet gold and bright colors make this work a perfect masterpiece. Just a very small amount of deluxe copies was printed on parchment, illuminated in the style of contemporary manuscripts and given to members of the nobility, ambassadors and church dignitaries.

DREAMLIKE: The influential novel "Hypnerotomachia Poliphili" by Francesco Colonna describes the dream of Poliphilos, who, on his quest for his beloved Polia, perambulates an ideal garden on the love island Kithera where he encounters mysterious creatures in strange places. The first edition of the famous illustrated book from Italian Renaissance, at the same time a highlight of Aldus' printing art, has remained a much-admired milestone in book printing until today. The estimate for this sought-after work is at € 20,000.