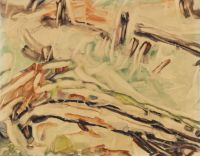 Christian Rohlfs
Studie nach einem Baumstamm
Watercolor, around 1911
Munich, December 4, 2019 (KK) - New records and sharp price increase are the aim of every auction, but that did not matter at all in the case of a very special work by Christian Rohlfs. A work that was confiscated by the Nazis in 1937 finally came home to the Kunstmuseum Moritzburg in Halle, Germany.

It all began as a standard procedure in context of which the work from a renowned Western German private collection was examined: a large-size watercolor by the Expressionist artist Christian Rohlfs that still was in its old frame. The surprise was revealed when a covering board was removed from the reverse side of the frame and experts at Ketterer Kunst discovered a stamp of what today is known as the Kunstmuseum Moritzburg in Halle an der Saale, as well as an old label with more information on this work in typescript.

The suspicion that this might be one of the 147 artworks removed by the Nazis from the "Städtisches Museum für Kunst und Kunstgewerbe" in Halle in context of the "Degenerate Art" Action in 1937 became substantiated in a standard check with the data bank of the Research Center "Degenerate Art". The watercolor, of which there was at that point not even a photograph, was recorded lost. The trace was lost with Hildebrand Gurlitt, who acquired the work in exchange for foreign currency from NS officials in 1940. It would take nearly 80 years until its rediscovery.

Ketterer Kunst informed the museum about the finding right away, and it soon became clear that it had strong interest in retrieving the sheet. This is why Ketterer Kunst decided to become active as agent and explained the situation to the owner, whose family had possessed the watercolor for decades. Together a solution for the good of all was attained: The work was removed from the auction, Ketterer Kunst paid for shipping and insurance, and the museum was enabled to buy the watercolor for a very fair price that would not exhaust its budget.

This concerted action made sure that Christian Rohlfs' "Studie nach einem Baumstamm" dated around 1911 would eventually be back at its old place where it will be displayed to the public.

"The return of the picture by Christian Rohlfs is not only good news for Halle, it is also good news for heirs, collectors and prospect buyers. It shows that it takes just a little bit of good will on all sides to find fair solutions for works with a Nazi past appearing on the market", says Robert Ketterer, owner of Ketterer Kunst. He continues: "This does not only apply to "Degenerate Art", of course, as fair solutions for objects the Nazis had looted from Jewish ownership have also been found. Through agreements with legitimate restitution beneficiaries we were able to make the art marketable again. This is a heart matter to me, as it is not only about the art itself, but also about a chapter of German history that may never fall into oblivion, and the art trade has to make its contribution to this endeavor."

The family company Ketterer Kunst (www.kettererkunst.com and www.ketterer-internet-auctions.com), with headquarters in Munich and branches in Hamburg, Duesseldorf, Berlin and the USA, was founded in 1954. It is one of the leading European houses for auctions of Fine Art from the 19th to the 21st Century and Rare Books. The latest art market review for Fine Art 2018, compiled by artprice.com, ranks Ketterer Kunst on place 11 in the global TOP 100. The auctioneer's clientele predominantly consists of international collectors, art dealers, curators and museums.