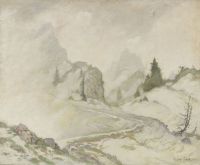 Joseph Wopfner
Chiemseefischer
Gouache and graphite on blue paper, around 1890
10,1 x 16,8 cm
Munich, November 2, 2018, (kk) - This is the first time that the saleroom auction of 19th Century Art at Ketterer Kunst will be accompanied by its own internet auction. Between November 15 and December 15 an additional array of 30 works that reflect the stylistic variety of the 19th Century will be called up on www.ketterer-internet-auctions.com.

Apart from English landscapes and Dutch genre scenes by artists such as A. Stone and Jacob Akkersdijk, the range of offerings also includes numerous works by Southern German artists. Among the famous names we find the Chiemsee painters Karl Raupp, Joseph Wopfner and Rudolf Sieck or the landscape painter Adolph Heinrich Lier. With Wilhelm Schreuer and Adolf Frey-Moock, the auction is topped off by the Düsseldorf School and Symbolism.

The works carry estimates in three- and four-digit realms. Please find further information in the pdf-catalog on www.kettererkunst.com.

Previews:
As of now all works included in the internet auction can be viewed in Munich. The objects in the salesroom auction are on display on the following dates:

Auction:
The internet auction on www.ketterer-internet-auctions.com is active from November 15 until December 15, 3 p. m.
The live auction takes place in Munich on November 23, starting at 4 p. m.

The family company Ketterer Kunst (www.kettererkunst.com and www.ketterer-internet-auctions.com), with headquarters in Munich and branches in Hamburg, Duesseldorf, Berlin and the USA, was founded in 1954. It is one of the leading European houses for auctions of Fine Art from the 19th to the 21st Century and Rare Books. The 2018 art market review, compiled by artprice.com, ranks Ketterer Kunst on place 19 in the TOP 100 Fine Art Auction Houses worldwide. The auctioneer's clientele predominantly consists of international collectors, art dealers, curators and museums.