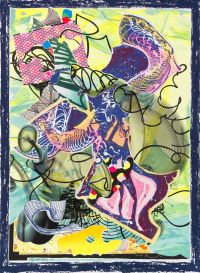 Munich, 13 June 2018, (kk) - Günter Steinle does not only run a successful construction company, he also has a great art collection. Works by renowned artists like Gerhard Richter, Frank Stella and Günther Uecker count among the gems in his collection. He will now sell around 70 works for which bids can be placed on www.ketterer-internet-auktion.com as of June 15. The online auction of the leading German auction house, which ends July 15 at 3 p. m., is very special because every work will be called up with a starting price of € 1 - despite the high quality.

Art and culture have always been heart matters to Günter Steinle. Early in his life he was part of the circles around the legendary Ulm School of Design. Many of its graduates became renowned artists and close friends of Steinle. He spotted their talents at an early stage and began to acquire their artworks.

His close contacts with world-famous artists also helped the Ulm native to support social projects important to him for their sustainable and a holistic character. In addition he initiated the "Günter Steinle Fondation" which, among others, puts focus on issues regarding historic responsibilities. In this context Steinle benefited from his connection to Frank Stella, who donated 30 prints with the aim to contribute the proceeds to the restoration of a concentration camp memorial site.