Ketterer Kunst Auction in Munich - 19th Century Art
€ 103,750* for Freedom
Munich, 24 November, 2017, (kk) - The auction of 19th Century Art marked the successful beginning of the autumn auction season at Ketterer Kunst in Munich with a total result of € 1.1 million*. The increasing appeal of this section was underlined by some 40% first time buyers and a sales quota of 80% by lots. A dramatic scene from the Greek War of Indepen-dence and several works by the salon painter Franz von Stuck were particularly sought-after. 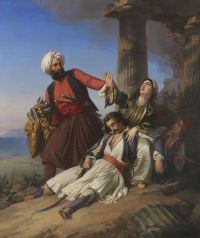 Lot number 8, an oil painting by Paul Emil Jacobs, made for a brilliant beginning of the auction. Among the competitors for the "Scene from the Greek War of Independence" from 1841 were not only Greek art traders, but also a private collector from Canada on the phone. However, eventually an art lover from Greece in the saleroom was able to stop the bidding race with his bid of € 103,750 - more than a tenfold of the calling price. At the same time he set a new German record for a work by Paul Emil Jacobs.

The list of desired objects also comprised several works by Franz von Stuck. As expected, the very popular motif "Dissonanz" (lot 52) scored highest. A collector from Berlin made the depiction of the little Daphnis driving the faun next to him crazy with his pan flute sure for himself with his phone bid of € 93,750*, relegating several collectors from Bavaria, Brandenburg and North Rhine-Westphalia to places second and beyond. The bronze "Amazone" (lot 59), on the contrary, will remain in Southern Germany. A private collector honored the work from 1897 with € 40.000*, enough to beat competitors from all over Germany, France and the USA.

The atmosphere in the saleroom was filled with suspense when lot number 21, Jan Chelminki's oil painting "Große höfische Jagdgesellschaft" from 1877 was called up. In addition to half a dozen fellow countrymen of the artist on the phones, a good number of written bids and numerous online bidders came a full auction room. For the result of € 92,500*, almost five times the starting price, an art lover from North Rhine-Westphalia carried the trophy home.

When Julien Dupré's "La Fenaison (Hay Harvest)" (lot 38) was called up the moment for the American art enthusiasts had come to get involved. Accordingly, a New York trader was able to stand his grounds against fierce competition in the saleroom and particularly against a bidder from California. The popular motif of the haymaking farm girls will cross the ocean for a price of € 55,000*.

All four works by Karl Hagemeister were not only sold with good price increases, they will also call Brandenburg, the artist's birthplace, their new homes. The array is led by the two oil paintings "Herbst III" (lot 66) and "Meereswogen" (lot 67), which climbed to results of € 35,000* and € 33,750* respectively.

Sharp increases were also realized by the following:

Since it was founded in 1954, Ketterer Kunst has been on the forefront of auction houses dealing in Fine Art and Rare Books, with its headquarters in Munich, and a branch in Hamburg. Representatives' offices in Berlin, Heidelberg, Duesseldorf, the Benelux Union, France, Italy, Switzerland and the US have contributed substantially to the company's success. In addition, exhibitions, special thematic and charity auctions as well as monthly online auctions at www.ketterer-internet-auction.com are regular events at Ketterer Kunst. Robert Ketterer is the owner of Ketterer Kunst.