Autumn Auctions: From Modern to Contemporary Art
A Nolde for Buddha 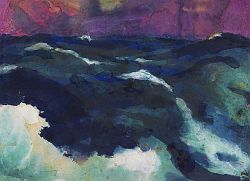 Emil Nolde
Hohe See unter violettem Himmel, 1930/35
Watercolor, 36,7 x 50,2 cm
Estimate: € 100.000-150.000
Munich, 15. September 2017 (kk) - This is something that surely would have pleased Emil Nolde: Proceeds of one of his watercolors will go into the construction of a Buddhist peace stupa. The work will be sold in the auction of Modern-, Post War and Contemporary Art at Ketterer Kunst in Munich from December 7th to 9th 2017.

Emil Nolde, who would celebrate his 150th birthday this year, was a pious man, however, his religious feelings were not based on a certain religion, instead they were of a very personal and spiritual nature. What mattered to him was the own experience and not the tradition. In this case it is a lucky coincidence that the consignor of the watercolor "Hohe See unter violettem Himmel" from 1930/35 feels the same.

To her it is a heart matter to contribute the work's proceeds to a place where everyone can feel happiness, so she will support a stupa in Grafenwörth in Austria, construction of which began last year. The peace monument and meditation building is erected under the supervision of the Korean Buddhist monk and scholar Bop Jon Sunim Tenzin Tharchin. It is intended to serve as a place of calm and contemplation for Buddhists and people of other persuasions likewise. At the same time the stupa will be a spot for communication and exchange, and, in general, a peace symbol.*

"I am delighted that proceeds from the sale of this powerful watercolor by Emil Nolde will go to the construction of a very special place of energy. This way we are able to do our job in the auction for our client, but we can also help many people to recover and recharge", says Robert Ketterer, auctioneer and owner of Ketterer Kunst.

Emil Nolde's seascapes are remarkably atmospheric pictures, which is also true for the watercolor "Hohe See mit violettem Himmel". It was made in an artistic act that was characterized by deep emotions. Nolde considered this loss of control as the peak of his artistic freedom. He lived out this freedom in form of his wet-in-wet technique. The way he handled water and colors shows how he surrendered to the powers of coincidence.

"A very suitable artwork", remarks Bop Jon Sunim Tenzin Tharchin: "The piling waves in Emil Nolde‘s work parallel our thoughts, as they are also constantly in motion, but, as it is the case with all phenomena, they are also subject to transience. The aim is to smooth the waters and to immerse into the sky's infinity and the sea’s vastness. This is how we liberate ourselves from burden in order to explore the full potential of bliss".

Since it was founded in 1954, Ketterer Kunst has been on the forefront of auction houses dealing in Fine Art and Rare Books, with its headquarters in Munich, and a branch in Hamburg. Representatives' offices in Berlin, Heidelberg, Duesseldorf, the Benelux Union, France, Italy, Switzerland and the US have contributed substantially to the company's success. In addition, exhibitions, special thematic and charity auctions as well as monthly online auctions at www.ketterer-internet-auctions.com are regular events at Ketterer Kunst. Robert Ketterer is the company?s managing director and owner.